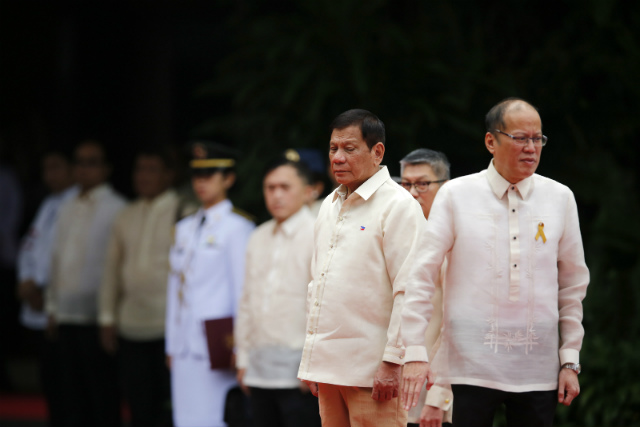 MANILA, Philippines – Newly inaugurated President Rodrigo Duterte on Thursday, June 30, assured the world that the Philippines under him will honor treaties and international obligations.

“On the international front and in the community of nations, let me reiterate that the Republic of the Philippines will honor treaties and international obligations,” Duterte said in his inaugural speech at the Malacañang Palace.

One of the international declarations signed by the Philippines was a joint declaration against the death penalty in October 2015, under the Aquino administration.

During the 69th United Nations General Assembly in December 2014, the Philippines also co-sponsored a resolution urging a universal moratorium on the death penalty.

Duterte is pushing for the return of the death penalty in the Philippines. He is also accused of condoning extrajudicial killings for the sake of public safety. (READ: Duterte camp to UN: He ‘will never condone’ killings)

Duterte’s pronouncement on international obligations came after he drew criticism for his previous statements on other countries.

On April 20, Duterte said that the United States and Australia could “go ahead and sever” diplomatic ties if they wanted to. This was after the US and Australian ambassadors criticized Duterte for joking about the 1989 rape of an Australian missionary.

On June 2, Duterte also cursed the United Nations for failing to solve the conflict in the Middle East and not helping the “black people” in Africa.

Duterte, who promised a “metamorphosis” once he takes office, on Thursday showed the diplomatic side of his leadership.

The President even said in his speech: “Before I end, let me express…on behalf of the people, our condolences to the Republic of Turkey for what has happened in the place. We offer our deepest condolences.”

In a toast minutes after his inaugural speech, Duterte said: “We seek a nation living in peace and order. We shall engage the world and make a solid contribution for our stability and security.”

“And therefore, Excellencies, I propose this toast: To our friends and partners in the region and the world over, we look to you for support as we continue to work together for peace, security, and progress.” – with a report from Agence France-Presse/Rappler.com