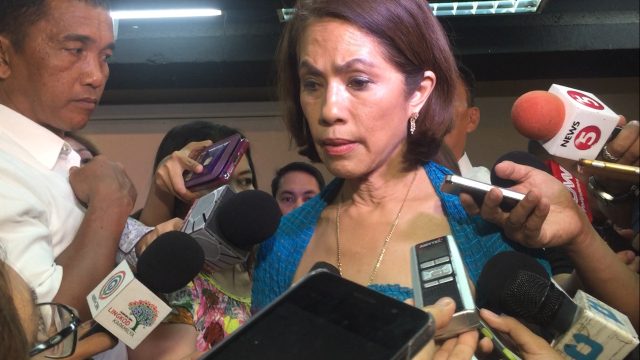 Facebook Twitter Copy URL
Copied
'If you're really responsible, then you have to have the highest standards,' Environment Secretary Gina Lopez tells mining companies

MANILA, Philippines – Environment Secretary Gina Lopez went right down to work on Friday, July 1 – a day after the inauguration of the new Duterte administration.

Her first order of business is to audit all existing mines in the country. The directive, Lopez said, came from President Rodrigo Duterte himself during their Cabinet meeting on Thursday, June 30.

“We are releasing the order for…an audit of all existing mines today,” Lopez said during her first press conference as environment secretary on Friday.

According to Environment Undersecretary Marc Fragada, the department order that will be released Friday will bring together the regional and central audit teams of the Department of Environment and Natural Resources (DENR) to start the audit of mining areas in the Philippines.

“We’ll take a look first, see anong nandiyan (what’s there), and look at violations. If there are violations, papunta ‘yun sa (that will lead to) suspension later on,” he added.

The anti-mining advocate spent much of her time on Friday talking about responsible mining in the country. (READ: 9 things you need to know about mining in Philippines)

“If you’re really responsible, then you have to have the highest standards,” Lopez said, referring to the mining companies’ supposed adherence to ISO 14001 Certification as a measure of responsible mining.

“To my mind, responsible mining is when you don’t cause harm,” she added in an ambush interview with reporters after the press conference.

She called on mining companies to “get their act together”, especially since her data shows that “wherever there’s mining, the people are poor.”

“The mining sector has to shift its method of operations. The poorest areas in the country are mining areas. [They should] do common good,” she added.

Asked about a possible conflict of interest with her fellow Cabinet members – particulary with Department of Public Works and Highways Secretary Mark Villar – when it comes to mining, Lopez said as long as “everyone’s on the same page, there is hope.”

“This is my hope, they’re there and President Duterte has chosen them, and my feel of the Cabinet is they do love the Philippines – especially Duterte. As long as you come from the same page which is love for country, we will see what is the best way to move forward.”

His brother Manuel Paolo is president of St Augustine Gold and Copper Limited that will operate the planned King-king Copper-Gold Project and its proposed open-pit mine that will produce copper, gold, and silver.

She did not directly answer when asked about a supposed debate on mining among Cabinet members on Thursday, but Lopez said the first Cabinet meeting was “really good.”

“Because there was a little bit of a…. Because I have my own sources of information, but it’s not anything that can’t be addressed, because my personal feel is everyone in the Cabinet really does love the Philippines, and they have their own whatever. And as long as that love of the Philippines is there, it should be okay.”

Lopez said Duterte wants all Cabinet members working together for the benefit of the people. – Rappler.com