Duterte to PNP: ‘Do your duty and I will die for you’

Jul 1, 2016 3:21 PM PHT
Bea Cupin
Facebook Twitter Copy URL
Copied
'Do your duty and if in the process you kill 1,000 persons because you were doing your duty, I will protect you,' President Rodrigo Duterte tells police officers in Camp Crame 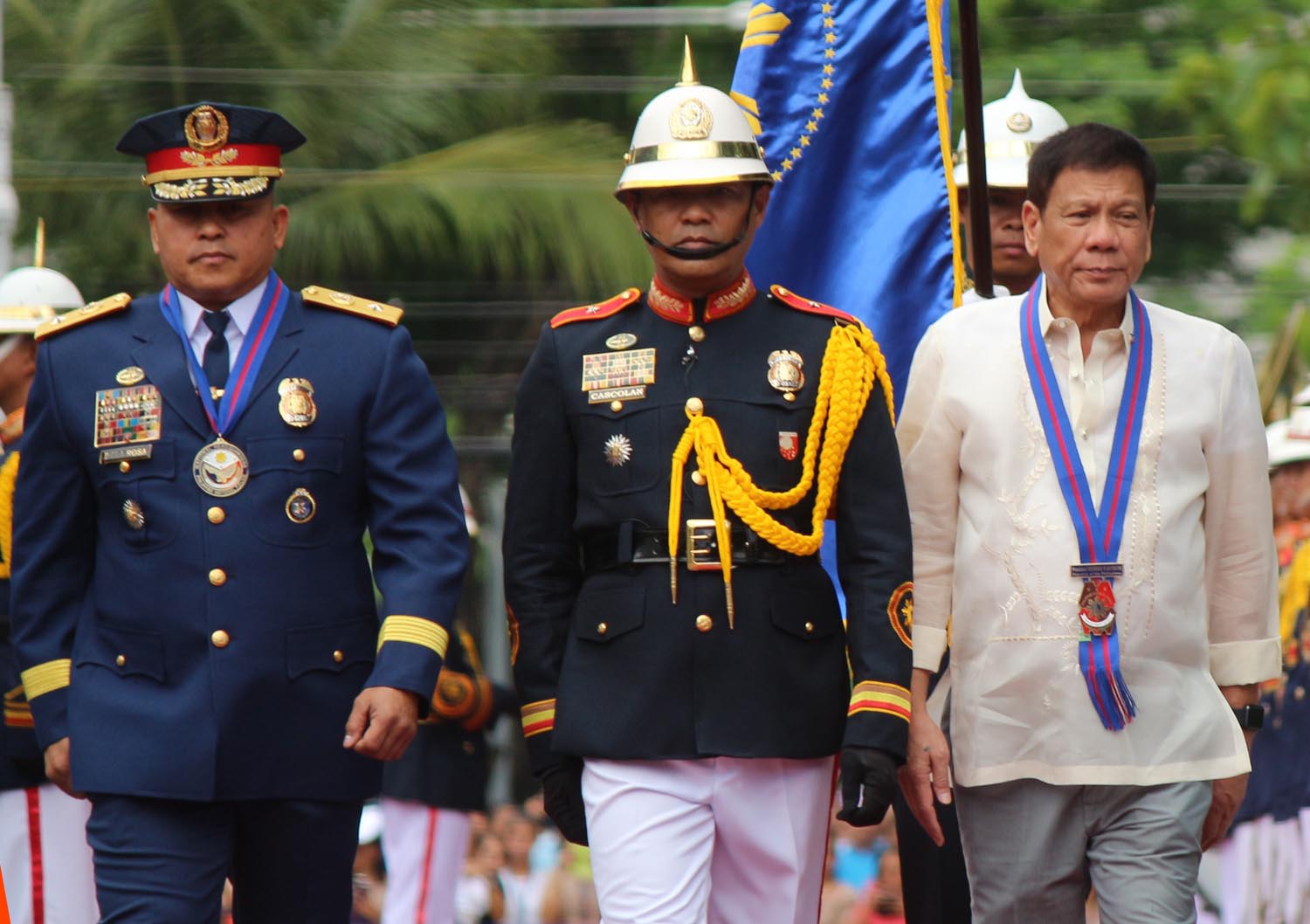 MANILA, Philippines – President Rodrigo Duterte issued another stern warning to wayward police on Friday, July 1, as he addressed the Philippine National Police (PNP) for the first time since he took his oath.

Speaking at the assumption of command ceremony of PNP chief Director General Ronald dela Rosa in Camp Crame, Duterte said there would be “zero tolerance, for abuses committed by the law enforcement agencies.”

Known for interspersing speeches with expletives, Duterte seemingly censored himself as he spoke for about 40 minutes before an audience of active and retired police officials, military officials, and members of the diplomatic corps. But he couldn’t help but let it out when he addressed corrupt cops.

“And if they will try to impeach me, I will hurry up the process and we go out of the service together,” added Duterte, to the laughter and applause of the crowd in Camp Crame.

Duterte echoed the earlier message of his first PNP chief, warning police officials to stay clear of “drug lords and budding criminals” who may want to mingle with uniformed officials. In the next 6 years, he said, he would “monitor” the track records of police officials.

“And I would know at alam ko ngayon kung sino ‘yung mga (I know who among the) generals who are tainted with corruption and drugs and you know that I know, you better resign, you have no more future in the police,” Duterte said amid applause.

Through a long narrative of his experiences as prosecutor and later, Davao City mayor, Duterte said he was familiar with the little and big acts of corruption in the uniformed service.

“Let me tell you now, I will not run this country with a corrupt police,” said Duterte, who is known for his tough – and sometimes, controversial – stand against crime and criminals.

Addressing allegations that his previous pronouncements mean he supports extrajudicial killings, Duterte began talking about the “fundamentals.” If a police officer is faced with “resistance that would place [his or her] life in jeopardy” after announcing his or her authority and the crime committed by a suspect, shooting – even shooting to kill – is justified.

Duterte has long been plagued with allegations of involvement in extrajudicial killings in Davao city, supposedly perpetrated by the so-called Davao Death Squad. He has denied involvement but has jokingly claimed to killing thousands.

Duterte’s 2016 campaigned was anchored on the promise of change, fueled by a campaign against corruption, crime, and drugs. It was the right “message” that propeled him to the presidency, Duterte pointed out.

“Economic progress, I leave it to the economic minds. And so my advice also to the businessmen, when you invite me, I’ve stated my qualifications. It’s a meager one. I don’t make – I don’t flaunt it. So when you go and ask me to talk to you and I’m your guest and I begin to talk about law and order and corruption, that is my territory,” he said.

Another of Duterte’s key campaign promises include increasing the salaries of the police and military, which he reiterated before the PNP. – Rappler.com