Duterte to military: Help me bring about peace 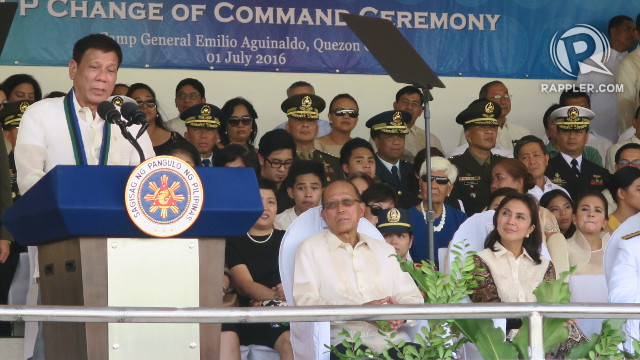 MANILA, Philippines – President Rodrigo Duterte reminded the entire Armed Forces of the Philippines that his job as the country’s new leader is to bring peace.

“The first job of the president is not to go to war but rather to bring peace in this country,” said Duterte on Friday, July 1, during the change of command ceremony of the AFP.

Duterte, who had taken his oath as president just the other day, said the peace process with different rebel groups would be among his administration’s priorities.

While efforts to resuscitate peace talks with the Left are already underway, Duterte said he may have to go to Jolo, Sulu at an unspecified time to talk to Moro rebels.

Duterte said he is willing to give Moro rebel leaders a “safe conduct pass” to facilitate peace talks.

“Next week, we are to talk to the MI[LF]…I’m willing to give them safe conduct passes, only the leaders,” he said.

Soldiers have come face to face with both NPA rebels and Moro rebels in violent encounters that have led to deaths on all sides.

But Duterte said such conflicts must end sooner than later.

“We cannot fight forever. We do not have the weapons, the armor, the bullets or the mortars. My job is to bring peace, but hand in hand, I must also bring order to my land,” he said in the presence of the military’s highest officials.

Duterte sounded less tolerant of the Abu Sayyaf, a terrorist group responsible for much of the violence in certain parts of Mindanao.

Though he said he is “not warning Abu Sayyaf,” he said, “There will always be a time for reckoning. We can only swallow so much. We cannot be the whipping boy of the few who wants nothing but maybe money and power in their hands.”

He also asked the military for their help in fighting the drug menace in the country.

One practice he wants stopped is the drug-dealing which, he claims, happens inside Philippine prisons. Such a practice was discovered in the New Bilibid prison.

“We will eliminate the druglords once and for all. Ako ay nasusuka na (I am so sick of it). You have to help me put a stop to this,” said Duterte.

The president warned druglords to count, not the days, but the hours until they are caught.

New AFP chief Visaya, who spoke before Duterte, vowed to help the President achieve his goal of peace.

“We will support the peace process with rebel groups and participate in consensus-building so we can already proceed forward in unity and harmony with our fellow Filipino citizens,” he said.

He added, the AFP’s fight against the Abu Sayyaf would be “unrelenting.”

As to cracking down on drugs, Visaya said the military under his watch would help the police and Philippine Drug Enforcement Agency (PDEA).

“We will also intensify our support to law enforcement agencies, particularly the PNP and PDEA in the mission to eliminate widespread criminality and the wanton destruction of lives brought about by the spread and use of illegal drugs,” said the AFP chief.

He and other army officials also plan to purge “scalawags” within their ranks – military men or women involved in the illegal drug trade. – Rappler.com