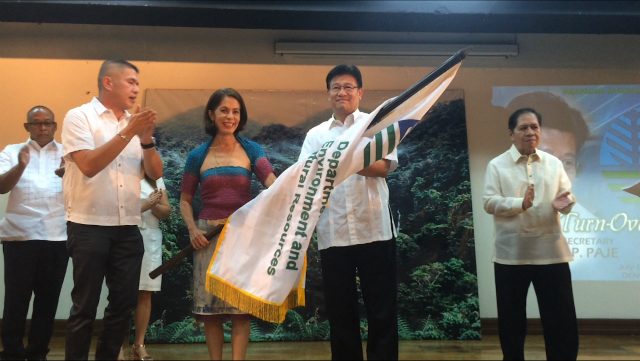 MANILA, Philippines (UPDATED) – What kind of leadership will Secretary Gina Lopez bring to the Department of Environment and Natural Resources (DENR)?

In her first address as environment secretary on Friday, July 1, Lopez quoted one part of President Rodrigo Duterte’s inaugural speech:

“Love of country, subordination of personal interests to the common good, concern and care for the helpless and the impoverished – these are among the lost and faded values that we seek to recover and revitalize as we commence our journey towards a better Philippines.”

Lopez went back to this part of Duterte’s speech before talking about her plans for the department. (READ: 1st day at DENR: Lopez orders audit of existing mines)

“We will never, ever do anything that will put at risk the lives of our people. Their lives are paramount,” she said, a commitment she would later reiterate.

“We are an island ecosystem. It’s my determination and commitment that people living in these islands should not suffer….I will not, during my term, allow people to suffer by any decision that will happen,” she added.

Lopez went on to praise the country’s biodiversity – one that she wants to explore, she said, in a way “that it benefits the people that live there.”

“We have the most flora and fauna exclusive to this country. My God! How can we possibly let these be destroyed?” she said.

Lopez expressed her willingness to work with the business sector and society, but she warned against “selfish interests.”

“We’re really blessed, and it’s my intention to keep these blessings in a way that benefits everyone….I would like to keep our biodiversity and not let it be raped by any selfish interest because it belongs to the Filipino people,” she said.

Lopez briefly talked about her plan to keep the National Greening Program, and to follow Pope Francis’ Laudato Si “to the letter.”

In his encyclical on the environment released last year, Pope Francis urged the world for action to prevent “extraordinary” climate change from destroying the planet.

He cited Filipino bishops in that groundbreaking papal document.

But for consumer group CitizenWatch, the appointment of Lopez as secretary would likely put Mindanao in danger.

“The appointment of Gina Lopez, a scion of the powerful Lopez clan and self-proclaimed environmentalist, to the position of Environment Secretary could have detrimental effects on the country’s long term economic growth, as well as, on the day to day lives of Filipinos throughout the country, most especially those living in Mindanao,” said Wilford Wong, secretary general of CitizenWatch.

Lopez is vehemently opposed to coal-fired power plants. But Wong argued that one of the factors affecting the growth of Mindanao is the constant threat of power shortages due to the lack of power plants.

The private sector has since committed to build coal-fired power plants to address Mindanao’s rotating brownouts. Three of these power plants producing 55 megawatts will be constructed in 2017.

“With Lopez in the DENR, however, these projects, and the arrival of the needed power they will provide, could come to a halt,” said Wong.

“Already, groups have been calling Lopez to halt coal power plants around the country in favor of renewable energy. Overlooked, however, is the fact that coal fired plants produce much more energy per plant, than solar or wind.”

He also pushed for a workable energy mix in the Philippines, instead of going “renewable all at once.”

After all, Wong pointed out that the capital needed to shift to “more expensive” renewable energy technology would lead to increased generation costs, which, in effect, would lead to higher electricity bills for consumers as well.

“A good energy mix means a balance between traditional and renewable sources of energy,” he added. – Rappler.com