Flood, gridlock after one hour of rain in Cebu 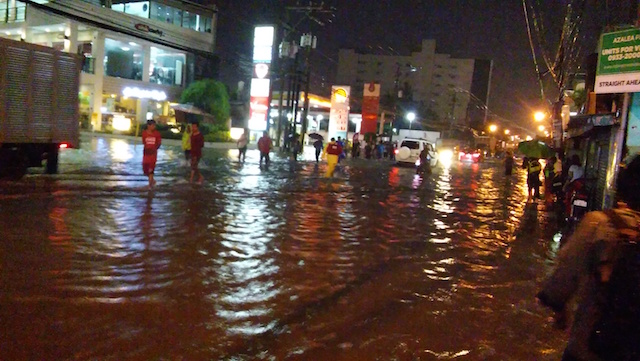 CEBU CITY, Philippines (3rd UPDATE) – After an hour of rain in Cebu, several areas in the province were flooded on Friday, July 1.

The rain began around 4 pm, and netizens began reporting flooded areas around 5 pm.

Waist-deep floods were reported on AS Fortuna Avenue in Mandaue City. Netizens also reported flooding in Banilad, around the Ayala Center, and Pope John Paul Avenue II in Cebu City around 5 pm.

The floods triggered vehicular gridlock in several intersections, including AS Fortuna Avenue and the Lopez Jaena Highway in Mandaue City, and Governor Cuenco Avenue in Banilad, Cebu City.

Cebu City Risk Reduction Management Council Head Nagiel Banacia also said buses have been deployed to pick up stranded passengers to and from the following areas:

Banacia said that passengers may have to wait for a while in the area because of continued gridlock around the city.

While floodwaters had begun to subside, Banacia said heavy traffic should be expected late into the evening.

According to Cebu City Traffic Operations Management (CITOM) head Ulysis Umpit, the following areas are still congested as of 10 pm:

He also said that flood waters remain high from White Gold House to the back of SM City Cebu.

According to the weather bureau, rains are expected to persist until 10 pm or 11 pm. – Rappler.com