Duterte on PH-China row: ‘War is a dirty word’ 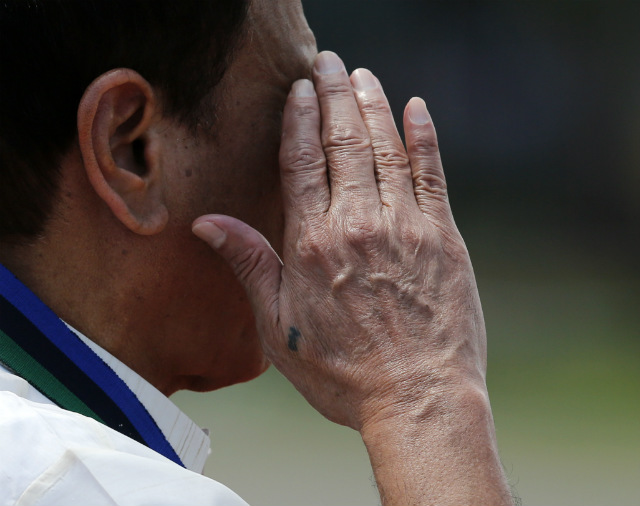 MANILA, Philippines – Philippine President Rodrigo Duterte on Tuesday, July 5, rejected the prospect of war ahead of a historic ruling by an arbitral tribunal in The Hague, Netherlands, on the Philippines’ case against China.

Duterte stressed that the Philippines is willing to talk with China after the tribunal issues its ruling on July 12.

“We are not prepared to go to war. War is a dirty word,” Duterte said at the 69th anniversary of the Philippine Air Force in Pampanga on Tuesday.

If not, he said, the Philippines “will accept it” as a country that “honors international commitments,” such as its ratification of the United Nations Convention on the Law of the Sea (UNCLOS).

‘We are not afraid of trouble’

“But we will proceed accordingly after we shall have the copy of the arbitral judgment. We will always decide for the greater interest of our country,” Duterte said.

“No foreign country…should expect us to swallow the bitter pill of harm to our national sovereignty, security, or development interests,” Xi said. “We are not afraid of trouble.”

In his first meeting with his Cabinet on June 30, Duterte said the Philippines will not “flaunt” a possible ruling in the Philippines’ favor. This is because “if we decide right, we might also find some alleviation for some of the problems here.”

In a forum on Monday, July 4, Philippine Foreign Secretary Perfecto Yasay Jr also said the Philippines “does not fear to negotiate” with China. Yasay said, “There is nothing to fear but fear itself.” – with reports from Agence France-Presse/Rappler.com