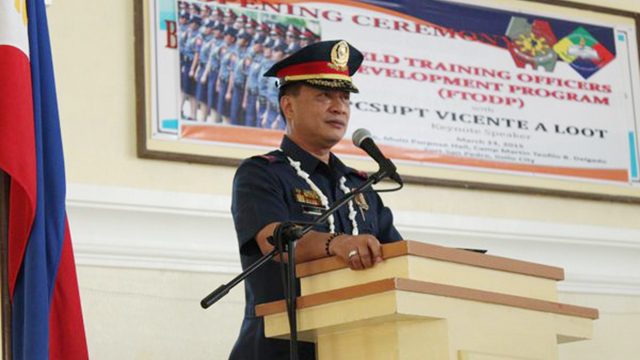 Facebook Twitter Copy URL
Copied
'I will be tried by publicity. I hope I could be given the chance to clear my name,' says former PNP director for training service Vicente Loot, now mayor of Daanbantayan, Cebu

CEBU CITY, Philippines – Vicente Loot, the recently elected mayor of Daanbantayan, Cebu, sought to clear his name after President Rodrigo Duterte named him as one of the two retired police generals, out of 5 total police generals, who had allegedly served as “protectors of drug lords.”

Duterte named the 5 Philippine National Police (PNP) generals during the 69th anniversary of the Philippine Air Force in Clark, Pampanga, on Tuesday, July 5.

Loot recently won as mayor of Cebu’s northernmost municipality by only 7 votes over his opponent Augusto Corro, who was the incumbent mayor. (READ: Incumbent Cebu mayor who lost by 7 votes won’t concede)

He told the ABS-CBN News Channel (ANC) in an interview that he is innocent of Duterte’s accusations. “My wife is a politician; I am a perennial victim of black propaganda in Cebu,” he said.

Vicente told ANC: “I will be tried by publicity. I hope I could be given the chance to clear my name.”

Loot served in the PNP for 37 years, and was awarded one star in 2011. He mentioned that he served as the regional director of the anti-narcotics group in Cebu from 2000 to 2001, and received an award for his time as the director. He was director of the PNP training service at the time of his retirement.

Loot ran under the United Nationalist Alliance (UNA) in the 2016 elections, while his opponent Corro ran under the Liberal Party (LP).

In a phone interview with Rappler, Department of the Interior and Local Government Secretary Ismael Sueno said that he is set to meet on Wednesday, July 6, with investigating teams from the DILG and the National Police Commission (Napolcom).

“We have formed an investigating team at the DILG, we will have a breakfast meeting, an emergency meeting tomorrow, to discuss our immediate actions,” he said.

Sueno said that he contacted Napolcom immediately after learning of Duterte’s speech in Clark.

The investigating teams will discuss the next steps involving the 5 generals linked to the illegal drug trade. But Sueno added that the generals are not yet expected to present their side at the Wednesday meeting.

“Wala pa, mag-uusap muna kami kung ano gagawin (We still have to talk about what to do),” he said. – with reports from Katerina Francisco/Rappler.com