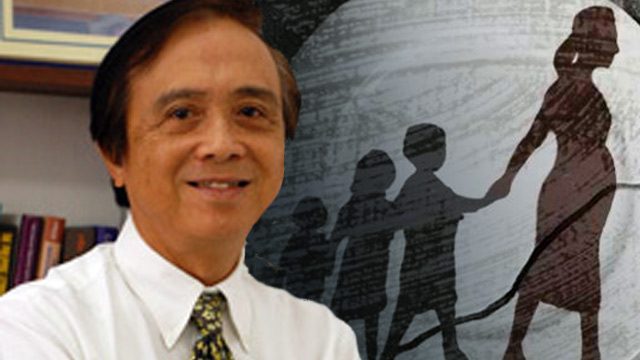 “We will ask the President to issue an EO to local government executives, to the municipality level, and not just the big cities, not just the provinces, that the RPRH law is a law and it should be implemented fully,” Pernia said during a press conference with Klaus Beck, Philippine country representative of the United Nations Population Fund (UNFPA).

Pernia, a professor emeritus at the University of the Philippines (UP) School of Economics, earlier said that RH and responsible parenthood is part of the President’s economic agenda.

“Our target under the Duterte administration is to try to reduce poverty from the current 26.3%…. We want to reduce it by something like 1.25% or 1.5% every year,” he said.

“That’s feasible, because it’s really going to be a combination of rapid economic growth…that generates jobs, including jobs for less skilled, the poorer sectors of population. The other way, which is complementary, is the full implementation of the RPRH law.”

Pernia said economic growth in the country must be more “pro-poor,” while women who want to avail themselves of RH services should be able to do so at the local level.

But a temporary restraining order (TRO) from the Supreme Court (SC) is hampering the full implementation of the RH law. (READ: Use of modern family planning methods in PH rose in 2015 – report)

In 2015, the SC temporarily stopped the Department of Health’s (DOH) distribution and sale of implants, a contraceptive that can prevent pregnancies for up to 3 years.

The SC also prohibited the Food and Drug Administration from “granting any and all pending application for reproductive products and supplies, including contraceptive drugs and devices.”

“This is a problem with our judiciary. They just take their sweet time. They don’t realize how serious it is to have a TRO like this because everybody knows by now, 11 women die of pregnancy and birth-related causes, and these could have been prevented if these TROs were not in effect.”

Aside from an EO, Pernia also plans to suggest to Duterte “an informal kind of friendly conversation” that will include the 3 branches of government, instead of a “formal” Legislative Executive Development Advisory Council (LEDAC)-type of meeting.

“Because our problem is our main departments are not…just speaking with different voices, but they’re not acting to achieve the same goal, or agree on ways to achieve a common goal of economic sprogress [and human development].”

It’s been more than a year since the TRO was issued. Pernia fears the effects of the TRO – maternal deaths, teenage pregnancies, and unwanted pregnancies – could become bigger social problems in the long run.

Aside from the TRO, another challenge in the implementation of the RH law is the non-compliance of some LGUs on the ground. For instance, in February 2015, Sorsogon City Mayor Sally Lee issued an EO that declared the city “pro-life”.

The health department said the EO in effect banned family planning commodities in the city, and RH services were “stopped by the mayor arbitrarily.”

DOH is already preparing a “first-of-its-kind” case against Lee for her alleged “gross violation” of the RH law.

The controversial RH law was enacted in 2012 but it was only declared constitutional by the Supreme Court in 2014. It was not fully implemented until November 2014. – Rappler.com