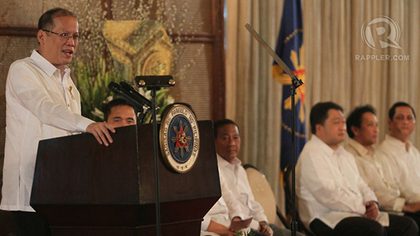 MANILA, Philippines – On his 52nd birthday on Wednesday, February 8, President Benigno Aquino III visited victims of the recent magnitude-6.9 earthquake in the Visayas.

The President also said he “felt” the water shortage in the area, and acknowledged the ship that brought water purification systems to the affected areas Wednesday afternoon.

He said government, on the other hand, can help restore normalcy to the lives of residents with the help of non-government organizations and other concerned citizens.

One of the places that Aquino visited was Guihulngan City, the earthquake’s hardest hit locality. He also scheduled a visit to Dumaguete City, the capital of Negros Oriental badly affected by the quake.

During his visit to Guihulngan, the President turned over P5.7-M for relief and rehabilitation efforts to Negros Oriental Gov Roel Degamo, according to a tweet by Communications Undersecretary Manolo Quezon III.

The President visited the badly hit areas “in keeping with the values of servant leadership espoused by his family,” said Presidential Spokesperson Edwin Lacierda in an earlier statement.

“The President is deeply concerned about our countrymen in the affected areas. He is focused on ensuring that services (resume) at the soonest possible time,” Deputy Presidential spokesperson Abigail Valte also said.

Aquino also appealed to everyone to remain calm and to cooperate with authorities, according to Valte.

The President’s early visit to earthquake-stricken areas is unlike his supposedly “delayed” visit to victims of Tropical Storm Sendong in December 201. For that, he earned the ire of critics. – Rappler.com