Is he top ‘drug lord’ Peter Lim? 9 things about the Cebu businessman 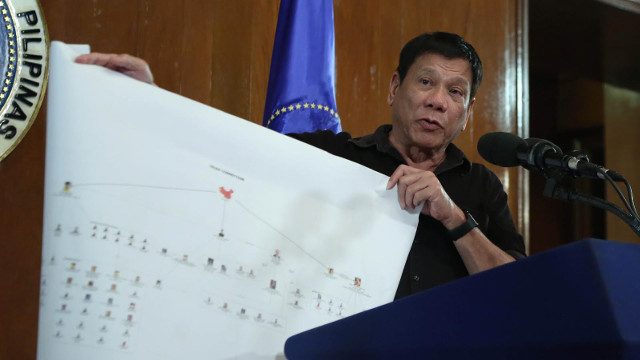 Facebook Twitter Copy URL
Copied
There are hundreds of Peter Lims in Cebu but there is only one who had been accused of being a drug lord in the Visayas and the subject of a congressional inquiry in 2001. Here are 9 things we know about him.

CEBU CITY, Philippines – “The moment he steps off the plane, he will die,” President Rodrigo Duterte warned a certain Peter Lim on Thursday, July 7.

He was speaking about a top drug lord, one of 3 supposedly operating in Central Visayas, and allegedly protected by retired police general General Marcelo Garbo.

The other two are Herbert Colangco and Peter Co, who are serving time at the New Bilibid Prison.

Garbo was among 5 police generals Duterte accused of links with the drug trade at the 69th anniversary of the Philippine Air Force in Clark Freeport, Pampanga, on July 5.

So who is this Peter Lim, the supposed big time drug lord in the Visayas, whom Duterte was talking about?

In Cebu City, there is one Peter Lim who had been accused of being a drug lord in the Visayas, and the subject of a congressional inquiry in 2001. The allegations remain unproven.

Here’s what we know about him.

1. He was investigated for drug trafficking before

The 71-year-old Cebuano businessman owns Hilton Heavy Equipment. While his lawyer Dioscoro Fuentes denies he is involved in the drug trade, a congressional inquiry on drug trafficking investigated him and his brother, Wellington, in 2001.

2. Witnesses in the House probe were killed

In 2006, Dy was shot by two unidentified men in Cebu City. In 2011, Liu was killed in his home in Talisay City. Cebu City Mayor Tomas Osmeña said he had placed Liu under his protection, but he was killed because he decided to move to neighboring Talisay.

3. A high-profile rape and murder convict alleges Lim framed him

Lim’s name also came up in a 2012 documentary, Give Up Tomorrow, which revisited the 1997 rape and murder case of sisters Marijoy and Jacquiline Chiong in Carcar, Cebu.

A Spanish-Cebuano named Paco Larrañaga, a relative of the Osmeña family, claimed he, along with several co-defendants, were wrongfully convicted and framed for the murder of the Chiong sisters.

The film offered another perspective on what happened on the night of the murder: Larrañaga was in Manila at the time of the murder; the father of the Chiongs worked for Lim, and was scheduled to testify about his alleged drug dealings when his daughters disappeared. This prompted him to back out as a witness.

Neither investigators nor prosecutors pursued that angle. Larrañaga was transferred to a Spanish prison in 2009, where he continues to serve a life sentence.

4. Lim has powerful friends in politics

When asked by reporters, Osmeña admitted knowing a Cebuano businessman named Peter Lim and described their relationship as “civil.”

Osmeña said he was “unsure” if this was the same Peter Lim named by the President. He did not say if he had knowledge of Lim’s alleged involvement in the drug trade, or if Lim is actually the owner of Jaguar bar, an alleged front business.

He said he couldn’t stop Lim from doing business without reason. “This is not a martial law country,” Osmeña told reporters.

Aside from being friends with Osmeña, Lim is known to be invited to parties of Cebu’s political and business elite.

5. Duterte was seen with Lim twice in June

When he was still president-elect, Duterte had seen Lim in person during two different occasions in Cebu. This was also mentioned by Lim’s lawyer, Dioscoro Fuentes.

Local media outlets (including Rappler) spotted Lim and Duterte at a party organized for the newly-elected president by Fernando “Ding” Borja, the president of Adnama Mining Resources, at the Adnama Building in Mandaue City, on June 8. Several other local Cebu leaders were also at the event, including Osmeña.

The second time was at the wedding on June 25 of Bea Borja, daughter of the Adnama president. Both Duterte and Lim were principal sponsors of of the newlyweds.

We do not know, however, if Duterte knew that Lim was going to be there beforehand, and what they said to each other.

6. He has several legitimate businesses

“He runs legitimate businesses, not drug-related businesses. This is why he is confident that he is not the Peter Lim that the President mentioned. Maybe the other Lim is out there,” Fuentes told reporters in a recent press conference.

7. Lim says he’s not the drug lord Duterte’s talking about

Another reason why Fuentes doesn’t think the President was referring to his client is that the 71-year-old Lim is not abroad, but at home, recovering from a kidney illness.

Lim, through his lawyer, has said he wants to clear his name, but could not yet face the media due to his illness.

8. Lim says he does not know Garbo

According to Fuentes, Lim has never met Garbo, who has yet to comment on whether he ever got to know Lim during his stint as Region 7 police director.

9. Cebu politicians are quiet on Lim

Former Cebu representative Antonio Cuenco and his son, Cebu City Councilor James Cuenco, are both being careful not to assume that the Peter Lim that Duterte had talked about is the same one probed for drug trafficking 15 years ago. They said it’s better not to jump to conclusions because Peter Lim is a common name.

No other Cebuano politicians have spoken up on Lim since Duterte’s announcement.

Much has been said about Co and Colangco because they are still in prison. But there is no certainty, for now, if the Lim of Hilton Heavy Equipment is the same person at the receiving end of Duterte’s threats. – Rappler.com