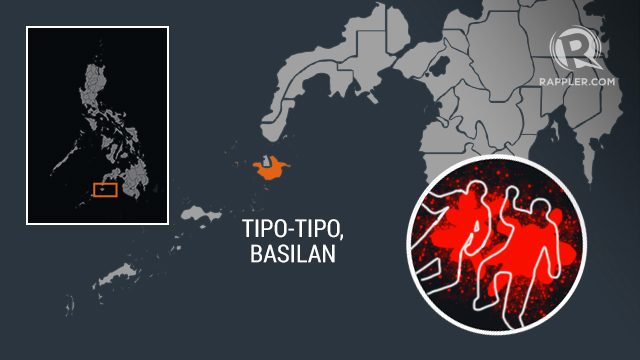 ZAMBOANGA CITY, Philippines – A series of attacks against Abu Sayyaf strongholds in Basilan, which began last week, led to the killing of at least 18 terrorists and the wounding of 9 others, the military said on Monday, July 11.

Killed in the July 7 attacks in Barangays Baguindan and Silangkum in Tipo-Tipo town, Basilan, were Julkifli Sariul and Kussien Pallam Seong. Among those wounded were Boy Indama, Abdul Karim, Hakim Jalul, Bong Assam, Albert Tuason and Gapul Melling, all members of the Abu Sayyaf Group (ASG).

The other slain ASG members have yet to be identified, according to Major Filemon Tan, spokesman of the military’s Western Command.

Tan said heavy firefight continued on Monday, with troops using both artillery and air support in the battlefield.

In Sulu, among the casualties in separate attacks were identified as Abu Sayyaf members Sabtola Mahalli, Mallah Sangkula, and Bas Sariyul.

Sangkula and Mahalli, a follower of Abu Sayyaf sub-commander Basaron Arok, were killed in an encounter with troops of the 35th Infantry Battalion in Barangay Maligay, Patikul, last July 6, military authorities said.

Mahalli had a standing warrant of arrest for his alleged involvement in the kidnapping of ABS-CBN reporter Ces Drilon and her crew in 2008.

Sariyul was killed last July 7 in an encounter with troops of the 45th Infantry Battalion in Barangay Buhanginan, Patikul.

Recent reports also pointed to Basilan as the site of the first ISIS major attack in the Philippines. This was in a 10-hour gun battle with the military that killed at least 19 soldiers and 13 terrorists. – Rappler.com