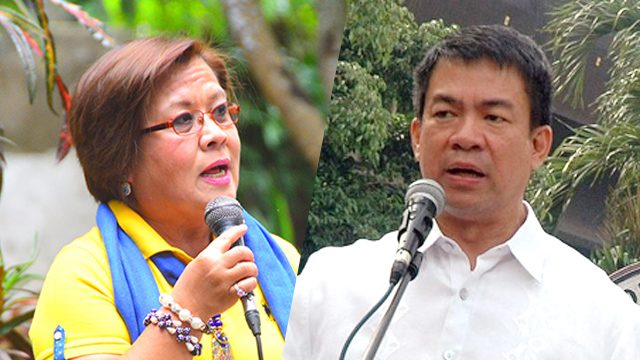 Facebook Twitter Copy URL
Copied
'It depends on how she [will justify] the investigation,' says Senator Aquilino 'Koko' Pimentel III, an ally of President Rodrigo Duterte

MANILA, Philippines – Too early to reject it.

That is what Senator Aquilino “Koko” Pimentel III – ally and lone partymate of President Rodrigo Duterte in the Senate – said when asked to comment on the recent spat between Senator Leila De Lima and Solicitor General Jose Calida over a possible investigation into drug-related police operations.

Pimentel, who is expected to assume the Senate presidency once the 17th Congress starts, said it is still premature to reject De Lima’s request for a legislative inquiry. The senators, he said, would have to decide based on the content of the resolution.

“Hence it’s too early to simply ‘dismiss’ it,” he added.

Despite the long-standing animosity between De Lima and Duterte over the issue of human rights, Pimentel earlier said the neophyte senator could still help the Duterte administration.

In fact, De Lima said she is – and will remain – part of the majority bloc, along with her other partymates in the Liberal Party. She vowed to support other programs of the administration, such as the executive order on Freedom of Information and the resumption of peace talks, among others.

De Lima is set to file a Senate resolution seeking an inquiry into the recent deaths of drug suspects in the country. Her plan caught the ire of Duterte’s allies, particularly Calida and Philippine National Police chief Director General Roland dela Rosa. (READ: De Lima to SolGen: Why react that way if PNP is innocent?)

On Monday morning, Dela Rosa accused the senator of legally harassing the police force and urged his men not to be “intimidated” by the threats of cases.

The government’s top lawyer, meanwhile, said that De Lima only wants media mileage. (READ: SolGen taunts De Lima: What did you do to curb illegal drugs?)

‘All agencies expected to cooperate’

While Pimentel is not discounting the possibility that the inquiry might not push through, he still assured the public that the Senate would do its duty if it starts a full-blown probe.

If they do launch an investigation, Pimentel said all concerned people and agencies are “expected” to participate.

He also maintained he is against all forms of abuses in the country.

“I join President Duterte’s administration in the fight against abuse as well as the abusive. We should rid our society of all forms of abuse by helping each other,” said Pimentel.

But Calida earlier said that as “defender” of the PNP and the government, he would advise policemen against attending the probe if they deem the investigation is not in aid of legislation.

Meanwhile, asked for a reaction to Senate President Franklin Drilon describing Calida’s remarks as “arrogant” and “unbecoming of a solicitor general,” Pimentel said: “No comment on the comments of others.” – Rappler.com