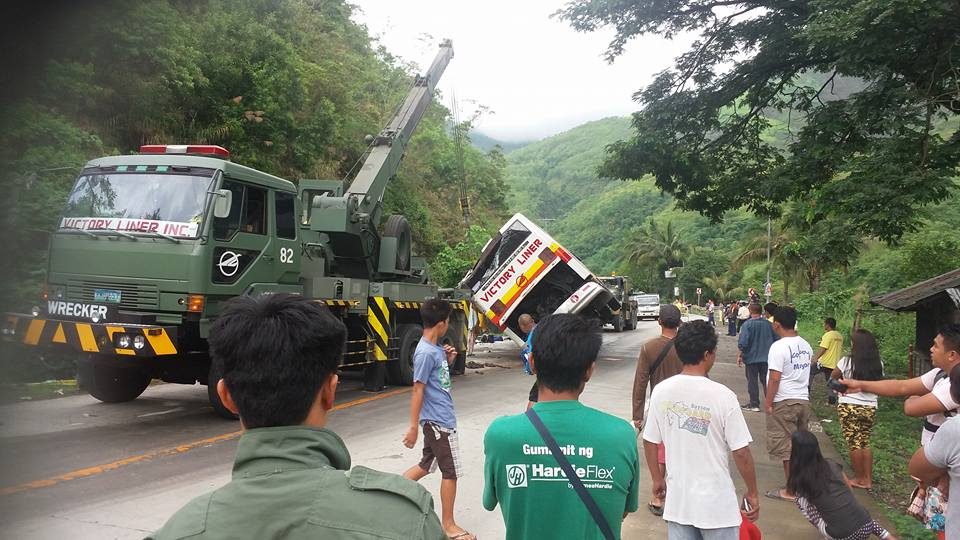 ISABELA, Philippines – Five people were killed and nearly 30 others injured in a bus accident in Carranglan town in Nueva Ecija province around 1:30 am on Tuesday, July 12.

The bus, a Victory Liner unit with the plate number AYK 552, was traveling from Tuguegarao City to Manila when it rammed a concrete barrier in Putlan village.

Carranglan police chief Senior Inspector Adriano Gabriel told Rappler in a phone interview that the driver may have lost control of the bus while traversing a downward slope.

Police have filed charges of multiple homicide and physical injuries against the bus driver, who was identified as 28-year-old Ryan Manuel. He is currently detained at the Carranglan police station.

Gabriel also said that the fatalities include two pregnant women. The victims’ identities are still being verified.

One of the survivors, Ambrocio Albano, said the driver had been “reckless.”

In a phone interview, Albano told Rappler he did not suffer a major injury because he was able to hold on to the seats tightly.

“Sa sobrang bilis magpatakbo ng driver, ayan aksidente ang inabot namin (Because the driver was driving so fast, we ended up in an accident),” he said.

Albano added that some of the passengers had already been urging Manuel to slow down before the accident.

Meanwhile, Gabriel said the injured were brought to a hospital in San Jose City, Nueva Ecija.

Some of them, he said, are in the Intensive Care Unit (ICU). – Rappler.com