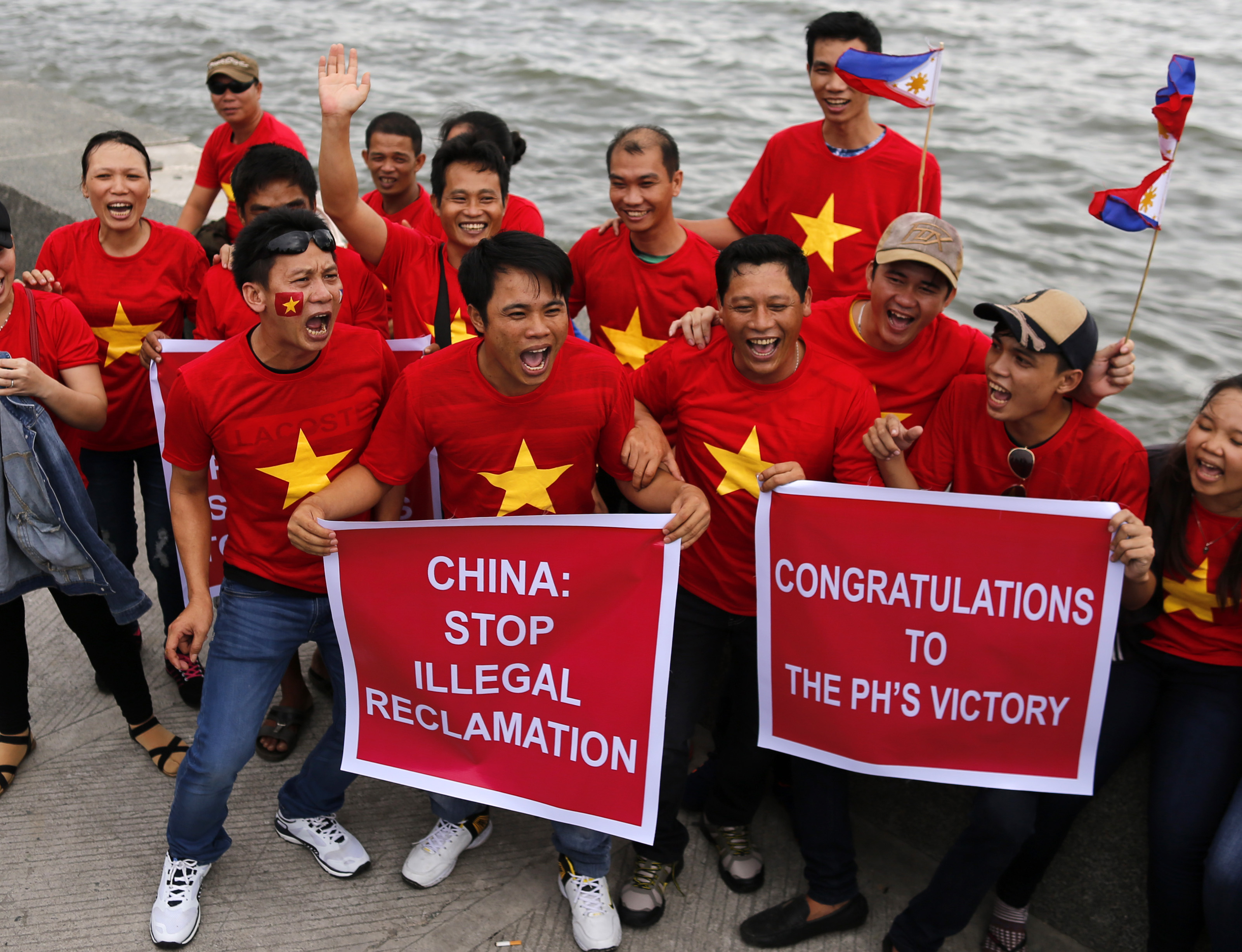 MANILA, Philippines – The Philippines’ victory over China in the dispute in the West Philippine Sea (South China Sea) on Tuesday, July 12, was not just a triumph for Filipinos, but for some of their neighbors as well.

Around 50 Vietnamese nationals representing the Vietnamese Community in the Philippines (VCP) joined local advocacy groups as they all celebrated the verdict of an arbitral tribunal at the Permanent Court of Arbitration (PCA) in The Hague, the Netherlands, on the West Philippine Sea case against China.

“We are very happy with the victory of the Philippines. We want to congratulate the Philippine government and its people on your victory in the struggle for justice and respect for international law,” VCP spokesperson Amber Lee said right after the announcement of the tribunal decision.

The arbitral tribunal ruled that China’s claim to resources within its “9-dash line” is invalid and contrary to the United Nations Convention on the Law of the Sea (UNCLOS), of which both China and the Philippines are signatories.

Lee also expressed confidence that “the rule of law will prevail over aggression.”

“Justice always prevails over coercion and intimidation. Congratulations to the Philippine people,” she said.

The VCP joined hundreds of people at the victory rally on the West Philippine Sea ruling even before it was announced.

At 2 pm on Tuesday,  or 3 hours before the PCA released its decision, various groups filled The Aristocrat restaurant along Roxas Boulevard where they all gave statements of solidarity anticipating a favorable decision for the Philippines.

“For us, in our view, we think that the ruling of the tribunal is impartial, objective, and will open up opportunities for other countries with territorial disputes….China tends to bypass and ignore international law and finally it will be stopped,” Lee said in a press conference.

The VCP members wore identical red shirts with a yellow star in the middle, representing the Vietnamese flag.

Another VCP member said he hopes the Philippines would set the precedent of standing up to China in the decades-long maritime dispute.

“I support Philippines and I want that after this, Vietnam will also follow. Because China also wants to own areas in our country. The Chinese have to respect our neighbor countries. They have to respect our own land, our own rule,” said An Phuc Dano.

Vietnam in the maritime dispute

Just like the Philippines, Vietnam is also affected by the “9-dash line” claim of China that was based on a map adopted by the Kuomintang Government in 1947.

China claims most areas of the South China Sea because of this claim, which overlaps with the Exclusive Economic Zone (EEZ) of Southeast Asian countries, including Vietnam.

Vietnam Foreign Ministry Spokesman Le Hai Binh said in a statement that Vietnam welcomes the decision of The Hague tribunal.

“Vietnam strongly supports the resolution of disputes in the East Sea (West Philippine Sea) by peaceful means, including diplomatic and legal processes and refraining from the use or threat to use force in accordance with international law,” the Vietnamese official said.He added that Vietnam continues to assert its sovereignty over the Paracels and the Spratlys (Kalayaan Island Group). The Philippines also has a claim in the latter.

On the day the ruling was released, Vietnam accused the Chinese coast guard of sinking a Vietnamese fishing boat near a disputed island chain, the latest in the two countries’ exchange of diplomatic barbs over disputed areas in the South China Sea.

In 2014, relations between Vietnam and China sank to their lowest after the latter sent a deep-water drilling rig into contested waters in the South China Sea. This sparked riots in Vietnam targetting Chinese-owned businesses in the country. It prompted the evacuation of thousands of Chinese from Vietnam, and the withdrawal of the oil rig.

In July 2012, Beijing, to assert its claim over the area, established the prefecture-level city of Sansha covering the Paracel and Spratly Islands.

Both the Philippines and Vietnam conducted diplomatic protests opposing the establishment of the city now with a population of over a thousand. – Rappler.com

Dwight De Leon is the president of DZUP Radio Circle, the official student organization arm of UP Diliman’s official organization arm, DZUP 1602. He is also currently an intern for Rappler.