Philippines ‘will not concede’ ruling vs China 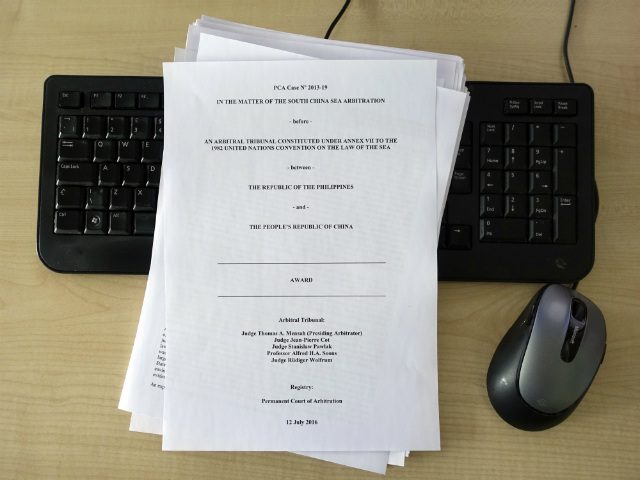 Facebook Twitter Copy URL
Copied
‘The baseline for any negotiation should be the decision from the Permanent Court of Arbitration,’ Philippine Solicitor General Jose Calida says

MANILA, Philippines – The Philippines on Friday, July 15, vowed to assert a historic decision on the West Philippine Sea (South China Sea) despite China’s refusal to negotiate based on this ruling.

“We will not concede any of the awards given to us,” Philippine Solicitor General Jose Calida told reporters on the sidelines of a forum Friday morning. (WATCH: West Philippine Sea after PH victory)

“The baseline for any negotiation should be the decision from the Permanent Court of Arbitration. That is the reference point,” Calida added.

Calida’s comments come after Chinese Vice Foreign Minister Liu Zhenmin said China “will not allow any negotiation based on the ruling.”

Liu added: “China expects the new Filipino government to cooperate and recognize that the ruling is nothing more than a piece of waste paper and cannot be enforced. China hopes that the Filipino side will set aside the award and return to the negotiation table.”

PH ‘will not sacrifice’ ruling

Sought for comment on Liu’s statement, Calida stressed that the ruling “is our baseline.”

“The Philippines will not sacrifice what we have obtained from this decision. But we will also pursue diplomatic means hopefully to convince China that we can coexist peacefully,” Calida said.

International lawyer Lawrence Martin, co-counsel in the Philippines’ case against China, said in a separate interview, “I think bilateral talks with China are certainly appropriate as long as they’re on the basis of the award.”

“The award is clear and binding, and I think China has to accept that any talks have to be using the award as the foundation,” Martin said.

On China’s stance not to negotiate based on the ruling, Martin said, “I take China at its word that that’s its position right now.”

“But I think the hope is that over time, their position will change, and they’ll find a way to gracefully accommodate themselves to the new situation.” – Rappler.com