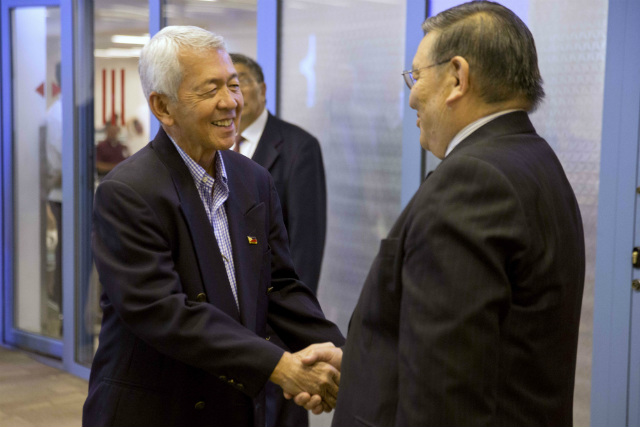 In his speech, Yasay reiterated his earlier statement on an arbitral tribunal’s historic ruling on the South China Sea, parts of which the Philippines claims as the West Philippine Sea.

“The Philippines strongly affirms its respect for this milestone decision as an important contribution to ongoing efforts in addressing disputes in the South China Sea,” Yasay said.

“We call on all parties to exercise restraint and sobriety,” he added.

Yasay also said the Philippines “attaches great importance to measures that will restore trust and confidence among parties in the region.”

“The Philippines shall continue to engage concerned parties to finding ways to reduce regional tensions and to build greater trust and confidence. In this regard, the Philippines will continue fostering mutually beneficial relations with all nations,” he said.

The ASEM is the first international meeting to be joined by the Philippines’ new government led by President Rodrigo Duterte.

The Philippine Department of Foreign Affairs earlier said Yasay will discuss during the ASEM “the need for parties to respect the recent decision of the arbitral tribunal.”

In his speech on Friday, Yasay said nothing about the need for parties to respect the ruling.

Yasay’s statement comes after Chinese Assistant Foreign Minister Kong Xuanyou insisted on Monday, July 11, that the ASEM meeting is “not an appropriate venue” to discuss the South China Sea.

China, after all, has long bridled at Philippine efforts to have the dispute discussed at multilateral events.

Instead, China stresses the need to settle the sea dispute through bilateral or one-on-one talks with the Philippines.

China, however, refuses to negotiate with the Philippines if the Southeast Asian country does not set aside the recent ruling on the South China Sea.

“China expects the new Filipino government to cooperate and recognize that the ruling is nothing more than a piece of waste paper and cannot be enforced. China hopes that the Filipino side will set aside the award and return to the negotiation table,” Chinese Vice Foreign Minister Liu Zhenmin said.

In reaction, the Philippines on Friday stressed that it “will not concede” the ruling despite China’s refusal to heed it. – with reports from Agence France-Presse/Rappler.com