Jul 18, 2016 1:56 PM PHT
Mara Cepeda
Facebook Twitter Copy URL
Copied
The Philippines is one of the few countries in the world without a national identification system, says a proponent 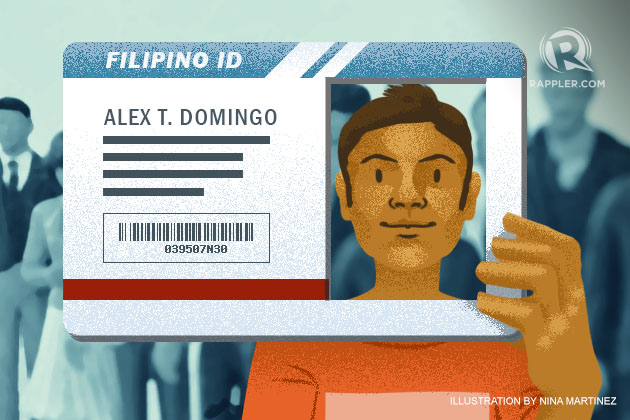 MANILA, Philippines – At least 3 lawmakers are re-introducing bills seeking to establish a national identification (ID) system for all Filipinos here and abroad.

Bills creating a national ID system were filed in the previous 16th Congress. The House of Representatives passed them but they were stuck at the Senate until the end of the session.

The Philippines is one of only 9 countries in the world without a national identification system, according to Belmonte. Under his proposal, the Filipino Identification System will consolidate all government-issued ID systems into one to “improve government services and limit red tape in government transactions.”

Both bills would require all Filipinos residing anywhere in the world to register their personal information into the central system to be managed by the Philippine Statistics Authority (PSA).

A registered Filipino will be issued a non-transferable Filipino ID card with a number that shall be valid for life.

Filipinos residing or working overseas are to register for their IDs at the nearest Philippine Embassy or consular office in the country where they are staying.

Based on the two House bills, the Filipino ID card would be honored in transactions concerning a person’s identity, marital status, birth, and other personal circumstances.

The Filipino ID card may also be used to identify voters, schools, and employees, as well as to avail of senior citizens’ benefits. It may also be used for court, prosecutor, and police clearances, and in banking and financial institutions.

“Once enacted into law, all citizens, not only government employees and SSS members but the self-employed, the unemployed, minors, and Filipinos working abroad will be under the coverage of the National ID system,” Batocabe added.

If passed into law, the Filipino Identification System Act would make the following offenses punishable:

Government officials and employees who commit these offenses will be perpetually disqualified from government. – Rappler.com