Jul 18, 2016 1:50 PM PHT
Jee Y. Geronimo
Facebook Twitter Copy URL
Copied
Drug testing in schools will not be mandatory and will only be allowed with the consent of parents, adds Education Secretary Leonor Briones 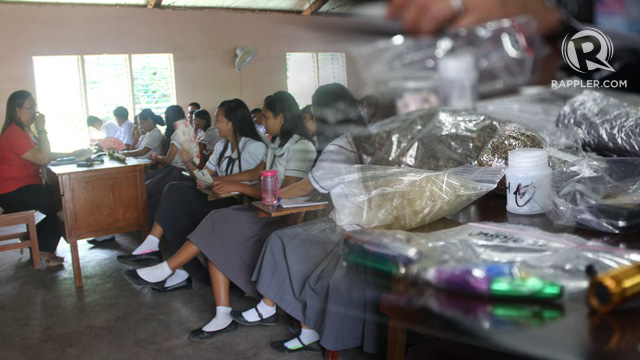 MANILA, Philippines – The education department wants schools to go beyond textbooks in teaching the dangers of drug abuse in the country.

(Let’s put a reality framework in the way we teach the composition of drugs. What’s in my mind is real life stories: Those whose lives were destroyed because of drugs, when they undergo rehabilitation, their lives get better.)

While Briones said it is important that the school curriculum already warns against drug use, she believes students could better understand if they see real life stories of the effects of drug addiction through films, plays, and dramas.

To make this happen, teachers will also have to be trained, she added.

(We have to capacitate our teachers so that they teach our students with heart and soul. We can’t just use lectures, books, workbooks…. That’s already in the curriculum.)

In 2013, a study showed that the most substantial decline in vices among Filipino youth and young adults was found in drug use. (READ: Music, drugs, and alcohol: Do young Filipinos party to get high?)

The Duterte administration has intensified its crackdown on drugs in the country, with a campaign that has seen hundreds of alleged drug suspects killed in police operations and the surrender of over 60,000 alleged drug addicts. (READ: Rising number of users seeking drug rehab is a ‘happy problem’ but…)

How do drugs reach schools?

(In mountains and in far-flung areas, motorcycle drivers bring the drugs… There are many ways, some deliver even at the school gates.)

She said that drug testing in schools will not be mandatory, and will only be conducted through random sampling. The testing will be based on existing regulations, and will only be allowed with the parents’ consent.

“We have to be very careful with the way we treat the child, because this might be a traumatic experience, they might think they are suspected of something…. These are minors, [they] need parental consent,” she added in a mix of English and Filipino.

For now, it will also be done through random sampling, and if the drug problem turns out to be “serious”, the department will consider expanding the coverage of the program.

Malacañang has already welcomed calls for all government employees to undergo mandatory drug testing as a “powerful symbolic act” that would “show that the people working in government are good people and they are people worthy of our trust.” (READ: Learning from Davao: Health chief eyes community-based drug rehab) – Rappler.com