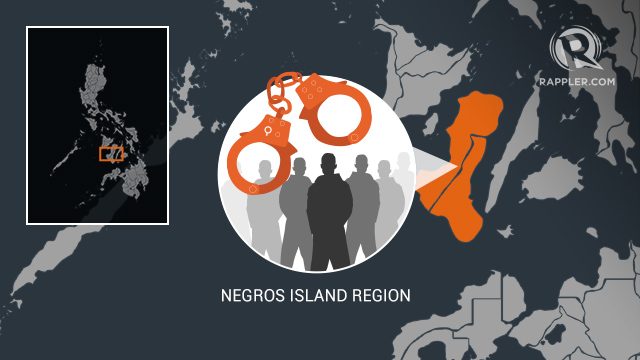 Facebook Twitter Copy URL
Copied
The highest number of those who surrendered are in Bacolod in Negros Occidental, and in Sibulan in Negros Oriental

BACOLOD CITY, Philippines – Almost 16,000 drug personalities have surrendered to the police in Negros Island Region in the first 3 weeks of the Duterte administration.

From July 1 to 19, records at the Police Regional Office-18 showed that 8,050 drug users and pushers have turned themselves in Negros Occidental while 7,949 have yielded in Negros Oriental.

During the first week of the new administration, the region reported around 5,000 personalities involved in drugs yielding to authorities for possible reformation or rehabilitation.

In the latest count, Bacolod City topped the list in Negros Occidental with 1,117 who surrendered, followed by Murcia town with 914.

In Negros Oriental, topping the list was Sibulan with 1,000, followed by Guihulngan City with 846.

In the same 19-day period, two drug suspects were killed in an encounter with the police during drug operations, while 115 pushers and 16 users were arrested. (READ: Rising number of users seeking drug rehab is a ‘happy problem,’ but…)

“They can see the result of the police efforts to stop this illegal activity. They have no choice [but to surrender],” he said.

Capa said that he is expecting more drug suspects to surrender in the coming days as “Oplan Tokhang” is still in progress.

“TokHang” is a contraction of “toktok” and “hangyo” – Visayan words for “knock” and “request”, respectively. It refers to the strategy of the police nationwide to go house-to-house in their jurisdictions and convince known drug pushers and users to surrender and be given an opportunity for reformation.

The regional police chief said he is expecting some of those who surrendered to go back to their illegal drug activities, as some of them were arrested during drug operations. – Rappler.com