Aquino hits SC: What option is left for Filipinos vs corruption? 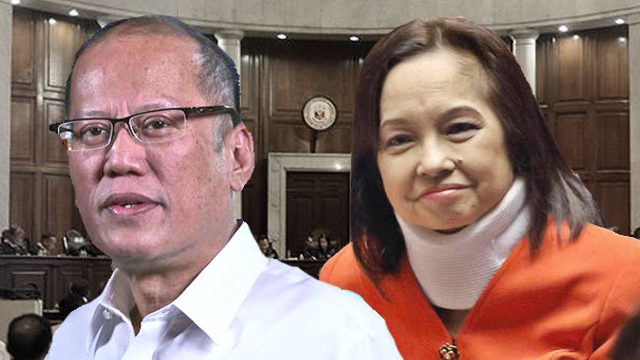 Facebook Twitter Copy URL
Copied
'Now I ask: By ordering the release and exoneration of Mrs Arroyo, what is the Supreme Court saying: That nothing anomalous transpired? That no crime happened? That no one should be held to account? That the funds were used properly?'

In a 4-page statement, Aquino expressed dismay over the decision, which was promulgated barely a month after he left Malacañang.

“Now I ask: By ordering the release and exoneration of Mrs Arroyo, what is the Supreme Court saying: That nothing anomalous transpired? That no crime happened? That no one should be held to account? That the funds were used properly?” Aquino said.

He added: “What is the recourse now of the Filipino people, when it is clear that a substantial amount of public funds did not go to the intended services, which would have alleviated the suffering of many of our countrymen?”

Aquino recalled how the PCSO, at the start of his term in 2010, had millions in debt. In fact, he said, many hospitals then stopped accepting PCSO promissory notes and guarantee letters, which poor patients have relied on to finance or subsidize their medical bills.

“One cannot help but think: If P365 million was used for its intended purpose, how many of our countrymen could have been afforded the basic and necessary service that they deserve?” he asked.

Aquino, in his response, used the very law that created the PCSO to counter the ruling.

Citing Republic Act 1169 or the PCSO Charter, the former president said the office shall be “the principal government agency for raising and providing for funds for health programs, medical assistance and service, and the charities of national character.”

There is no provision in the law, he added, that allows reallocation of funds for national security purposes, as shown by the reports by former PCSO officials and Arroyo’s co-accused, Rosario Uriarte and Benigno Aguas.

From 2008 to 2010, Aquino said a total of P365 million was transferred from the PCSO to the Office of the President, the bulk of which, he said, were used for activities not sanctioned by the PCSO Charter.

“Nowhere does it state that the funds of the agency charged to manage sweepstakes and provide charity can be reallocated for actions related to ‘bomb threat, kidnapping, destabilization and terrorism’ or for ‘bilateral and security relation’ to justify the transferring of additional funds from PCSO to the Office of the President, during the time of Mrs Arroyo.”

Aquino also questioned why Arroyo supported her subordinates who incurred losses for the government instead of penalizing them.

“In the case of the PCSO funds, instead of penalizing those who failed to prepare the right budget, it seems that Mrs Arroyo actually supported and encouraged poor managerial performance, to the extent that transfers were repeatedly allowed,” Aquino said.

“I wonder: What kind of superior espouses such practice? How does one justify mismanagement to such a degree? With Mrs Arroyo giving acquiescence and approval, doesn’t this make her also accountable?” he said.

The camp of Arroyo maintained that the High Tribunal’s acquittal proves “political persecution” by Aquino for 4 years. – Rappler.com