Duterte pleads for peace in Mindanao, even with Abu Sayyaf 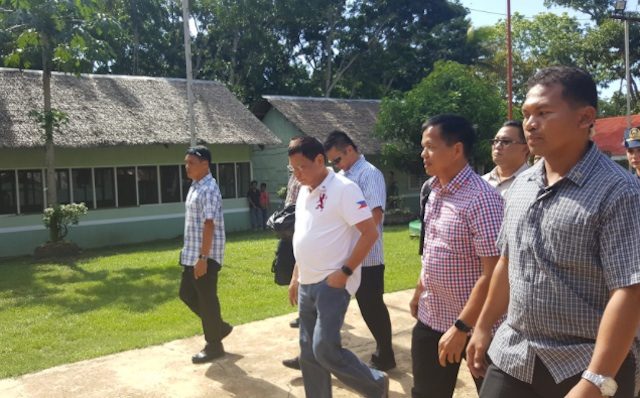 BASILAN, Philippines – In the very stomping ground of the Abu Sayyaf, President Rodrigo Duterte pleaded for peace and an end to hatred among all groups, including the Abu Sayyaf.

“Ako ay nakikiusap sa lahat (I am asking everyone). I am pleading for peace, pati sa (even with the) Abu Sayyaf kasi (because) you have committed so many crimes, killing people unnecessarily,” Duterte said at a military camp in Isabela, Basilan on Thursday, July 21.

This is a change in tune from the last time Duterte spoke publicly of the Abu Sayyaf. In a gathering of Muslim leaders in Davao City, he said the Abu Sayyaf does not fit his definition of criminality as their actions were “driven by desperation.”

Presidents before him have considered the group as bandits because of their involvement in criminal activities including kidnap for ransom, carnapping, bank robbery, and even the illegal drug trade.

Duterte, whose main audience was composed of military and police, defended military actions in the strife-torn island.

He said the military are only in the island “so that things won’t spin out of control.”

“They have a mission to do and ‘yan ang intindihan ‘nyo (and that’s what you should understand). There’s no intent to oppress you,” said the President, addressing civilians in the audience.

He called on all sides to stop hatred from controlling their actions. “Alisin ‘nyo yung galit, ‘yung hate, kasi (Get rid of your anger, your hatred, because) hate would drive you to kill,” he said.

To applause, Duterte said he would find a way to bring peace to Basilan, a known breeding ground of terrorists and bandits, especially in its southern, mountainous parts.

#PresidentDuterte says plea for peace and call to stop hatred will be part of his SONA. @rapplerdotcom pic.twitter.com/7hm5CSjdoZ

Duterte said he would reiterate his plea in his first State of the Nation Address on Monday, July 25.

He pitched federalism as one way to address the “historical wrongs” done to Muslims in Mindanao, which he claims fuels rebellion and terrorist acts.

(To my Moro brothers, I know you’ve been neglected. I know you’re oppressed. That is why we’re having these talks. We might have federalism.)

Earlier that day, Duterte met with some local government officials who supposedly told him their desire for a federal form of government.

Lamitan Vice Mayor Roderick Furigay told Rappler that he supports federalism and even prefers it to the proposed Bangsamoro Basic Law.

“Walang gobyernong makikialam sa inyo. Kayo lang ang magtatakbo ng gobyerno ‘nyo (The national government will not meddle in your affairs. You will be the one to run your own government),” Duterte said, in pitching for federalism.

Duterte’s visit to Basilan and Zamboanga City is his second sortie as president outside of Metro Manila and Davao City where he divides his week.

It was marked by heavy security. Media were not allowed to take video footage or make audio recordings.

Even local governments were only informed about the President’s visit just a day ahead. – Rappler.com