Duterte hints he can set aside Hague ruling for China talks

Jul 23, 2016 4:26 PM PHT
Paterno Esmaquel II
Facebook Twitter Copy URL
Copied
President Rodrigo Duterte says the Philippines 'can get many benefits' from China 'if we can just have a settlement with them despite the arbitral judgment' 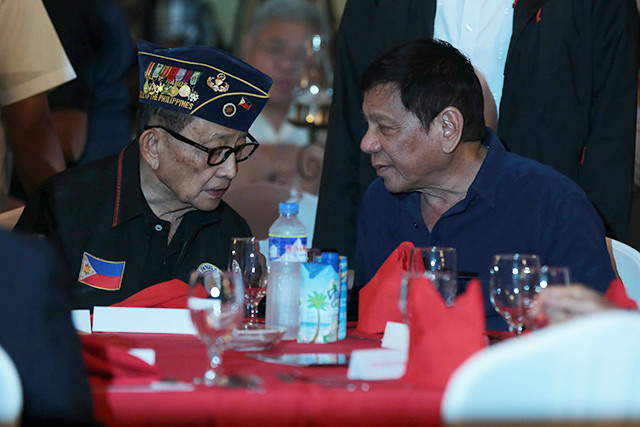 Ramos was Duterte’s first choice as envoy for talks with China, but the former president cited his age and other commitments as possible reasons for being unable to take on the task. On Friday, July 22, Duterte said he was considering former interior secretary Rafael Alunan III as substitute for Ramos.

Duterte said that Ramos’ suggestion – subject to “the will of the people, especially Congress” – can help enrich the southern Philippine island group of Mindanao.

“Ramos said that it’s all right if we take out the arbitral judgment from the talks,” Duterte said in a speech on Friday, July 22, in Buluan, Maguindanao.

Duterte said that if the Philippines does this, Mindanao can even surpass the rest of the country in terms of progress.

Senior Associate Justice Antonio Carpio of the Philippine Supreme Court, for his part, explained on Friday that negotiations with China can be divided into two parts.

Carpio said the first phase “is to reopen the talks without preconditions.” This means the Philippines will not bring up its legal victory, while China will not assert its 9-dash line, the demarcation it uses to claim the West Philippine Sea (South China Sea).

In the first phase, Carpio said, “We just sit down with them and agree: ‘How do we proceed?'”

“In the formal negotiations, we have no choice. We have to bring up the ruling because our negotiators cannot negotiate outside of that because of constitutional constraints,” Carpio said, citing constitutional provisions that protect the Philippines’ exclusive economic zone in the West Philippine Sea.

China earlier said it will refuse negotiations with the Philippines that will be based on an arbitral tribunal’s ruling against Beijing.

This tribunal in The Hague, Netherlands, on July 12 invalidated China’s expansive claim over the West Philippine Sea.

Philippine Solicitor General Jose Calida and Foreign Secretary Perfecto Yasay Jr, for their part, said the Philippines will have to use the Hague ruling in talks with Beijing.

Despite this ruling, Duterte on Friday explained that the Philippines still wants goodwill from China.

“If we can just have a settlement with them despite the arbitral judgment, I think that we can get many benefits,” he told his audience in Maguindanao.

To cite an example, he said that “we are planning to establish economic zones and farm-to-market roads.”