Duterte and the Senate: Of allies, critics, and in-betweens

Jul 26, 2016 4:35 PM PHT
Facebook Twitter Copy URL
Copied
While the President is expected to have smooth-sailing ties with the House of Representatives, his relationship with the Senate is less predictable 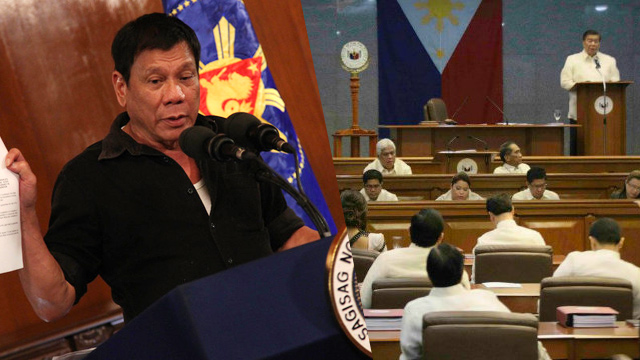 MANILA, Philippines – President Rodrigo Duterte might already have the solid backing of the House of Representatives but the same cannot be said of the Senate.

Unlike in the House, where a majority of lawmakers easily jumped ship to Duterte’s party, PDP-Laban, the dynamics in the Senate are different and more complex – traits that have long characterized the chamber.

The Senate in the 17th Congress would see a mixture of a few staunch allies, fiscalizers, and in-betweens.

While 20 of 24 senators have so far decided to join the majority bloc, Duterte only has two clear allies or party mates in the chamber – Senate President Aquilino “Koko” Pimentel III and neophyte Senator Manny Pacquiao.

His running mate in the May 2016 polls, Senator Alan Peter Cayetano, also has Duterte’s back in the chamber. Cayetano, however, lost the bid for the Senate presidency as his colleagues chose the President’s party mate over him.

As of posting, it was still unclear if Cayetano would join the majority bloc, which is expected to support Duterte’s legislative agenda. He was a no-show at the Senate on Monday’s opening of session for the 17th Congress. 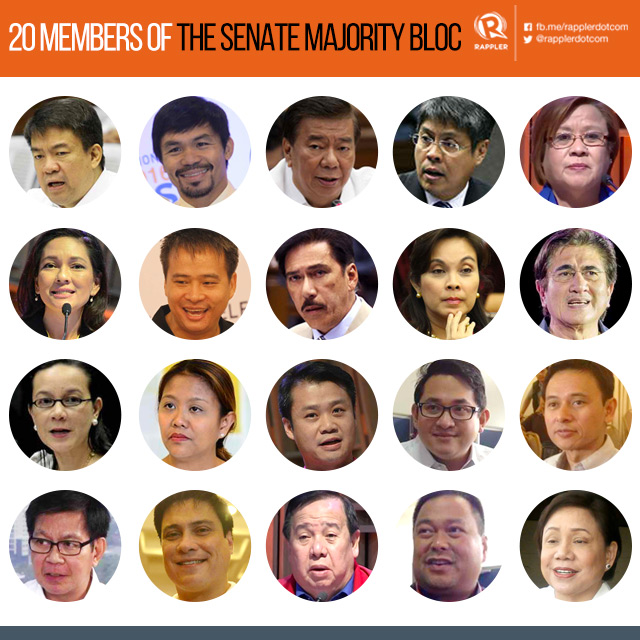 The once strong Liberal Party still has the numbers in the chamber, as well as the mixed bloc of Senator Vicente “Tito” Sotto III. With this reality, it remains to be seen how the supposed “majority” would push for the legislative agenda of the President.

Meanwhile, Senator Ralph Recto is leading the minority, with Senators Francis Escudero and Antonio Trillanes IV, one of Duterte’s staunchest critics since the 2016 campaign. (READ: Recto: Senate minority won’t oppose just for the sake of it)

It would not be a walk in the park for Duterte in the Senate. As early as now, there are glaring differences in opinions between him and some senators, especially on his controversial legislative agenda.

This includes the bill lowering the minimum age of criminal liability, the revival of the death penalty, the shift to federalism, and Charter change, including the preferred mode to amend the Constitution.

Senate President Pro Tempore Franklin Drilon of the LP said there is nothing unusual with having varying opinions, as it has always been the “reality.” The Senate, he added, has always been “independent.”

“There is nothing new to that. The Senate has always been known for taking independent positions. You have 24 republics in the Senate of the Philippines. So, you can imagine that there are 24 opinions on every issue. Differences of opinion between Malacañang and the senators don’t bother me. That’s a reality in our political system,” Drilon said.

Ultimately, Drilon said the Senate would decide as an institution after threshing out disparities.

“[On the] death penalty, a number of senators will have a number of ideas. It may not be in consonance with Malacañang but at the end of the day, how the institution will vote will depend on the position of the Senate,” he added.

Majority Leader Vicente “Tito” Sotto III shared the same sentiment. For him, having an opposition is good for democracy.

“Majority is supportive. Ok lang na may (It’s okay to have an) opposition, otherwise it is no longer a democracy,” Sotto told Rappler.

“The majority and Senate leadership will be tested in these controversial issues,” Sotto said.

Most bills, Aquino said, would be easily passed while the controversial ones – like federalism and death penalty – would have to undergo scrutiny.

“Most laws, especially those dealing with fighting poverty, will be passed without opposition, but there are already a few issues being talked about that will divide the house and where debate will necessarily have to ensue,” Aquino said.

Duterte has found two of his staunchest critics in the Senate – Senators Leila De Lima and Trillanes.

Despite being part of the majority bloc, De Lima said she sees herself as a “fiscalizer” of the administration.

“I see myself primarily as a fiscalizer when it comes to the anti-crime thrust of this administration,” she earlier said.

In fact, she has already filed a resolution seeking to investigate the recent spate of drug-related killings in the country. De Lima, former justice secretary and Commission on Human Rights chair, is also set to counter the death penalty bills backed by Duterte.

But at the same time, De Lima said she would support other plans of Duterte, adding that she would have to do a “balancing act” to achieve such polarizing roles.

“I’m not really concerned about labeling. Just being true to my principles and advocacies. I need to do a lot of balancing act between those twin roles. I am in full support to this administration’s fight against criminality/drugs but will continue to defend our Bill of Rights,” she told Rappler.

De Lima and Duterte have long been at odds over the issue of human rights. Her stance drew the ire of Duterte and his officials, such as Solicitor General Jose Calida, who threatened to file charges against her for failing to end drug proliferation when she led the Department of Justice.

Trillanes, for his part, vowed to be watchful of the Duterte administration. It was the senator who exposed the alleged multi-billion pesos in secret bank accounts of Duterte and his children at the tail-end of the May 2016 campaign.

Asked about his role in the 17th Congress, he said, “To be vigilant against potential abuses of authority while being supportive of sound policies and programs.”

With the complex dynamics brought about by the 24 “republics” in the Senate, it remains to be seen how Duterte would push for his key legislative agenda.

Will his iron first and demanding demeanor – which proved effective in steering Davao City as mayor – work with the Senate, a co-equal branch of government? –Rappler.com