On Monday, July 25, during the opening of the 17th Congress, the Senate passed a resolution electing Pimentel as the new leader, with 20 senators signing it.

Former Senate President Franklin Drilon is the new Senate President Pro-tempore while Senator Vicente “Tito” Sotto III is the Majority Floor Leader. Drilon and Sotto are the leaders of the two biggest blocs in the chamber.

Pimentel’s rise to the Senate presidency hardly came as a surprise. Barely a month after the May 2016 polls, the senators already discussed the leadership, with Pimentel being the front runner. (READ: Koko Pimentel will be next Senate president – Drilon) 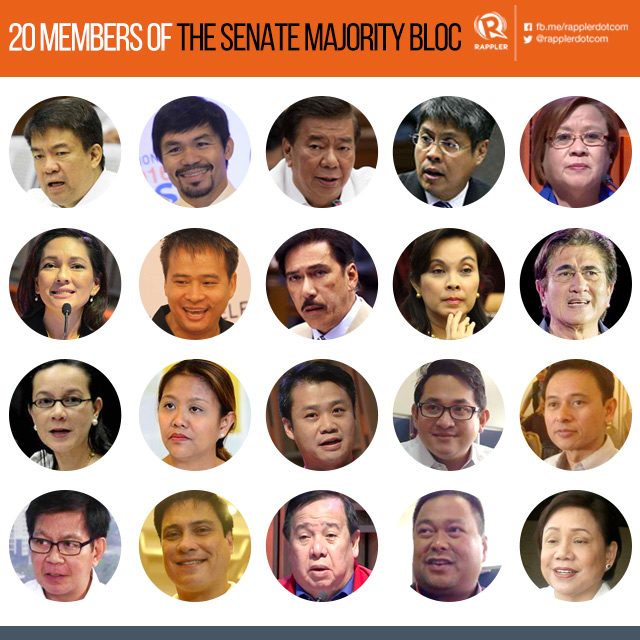 As of posting time, it is unclear if Cayetano will join the majority bloc, as he was a no-show during the Senate opening.

Drilon had said they discussed the leadership issues as early as May to immediately hit the ground running.

“There’s a lot of work to do in the years ahead. We already settled the leadership issue in the Senate so that we could concentrate in preparing for the work ahead of us so that the stability in the Senate leadership would enable us to concentrate on the measures that we would like to push in the first year of the Duterte administration,” Drilon said on Thursday, July 21.

Meanwhile, senators Francis Escudero and Antonio Trillanes IV, one of Duterte’s staunchest critics since the campaign period, opted to join Recto in the minority bloc. Members of the majority bloc met on Friday, July 22, at New World Hotel in Makati to discuss possible scenarios on Monday and settle the committees.

Here are some of the confirmed committee chairmanships for the 17th Congress.