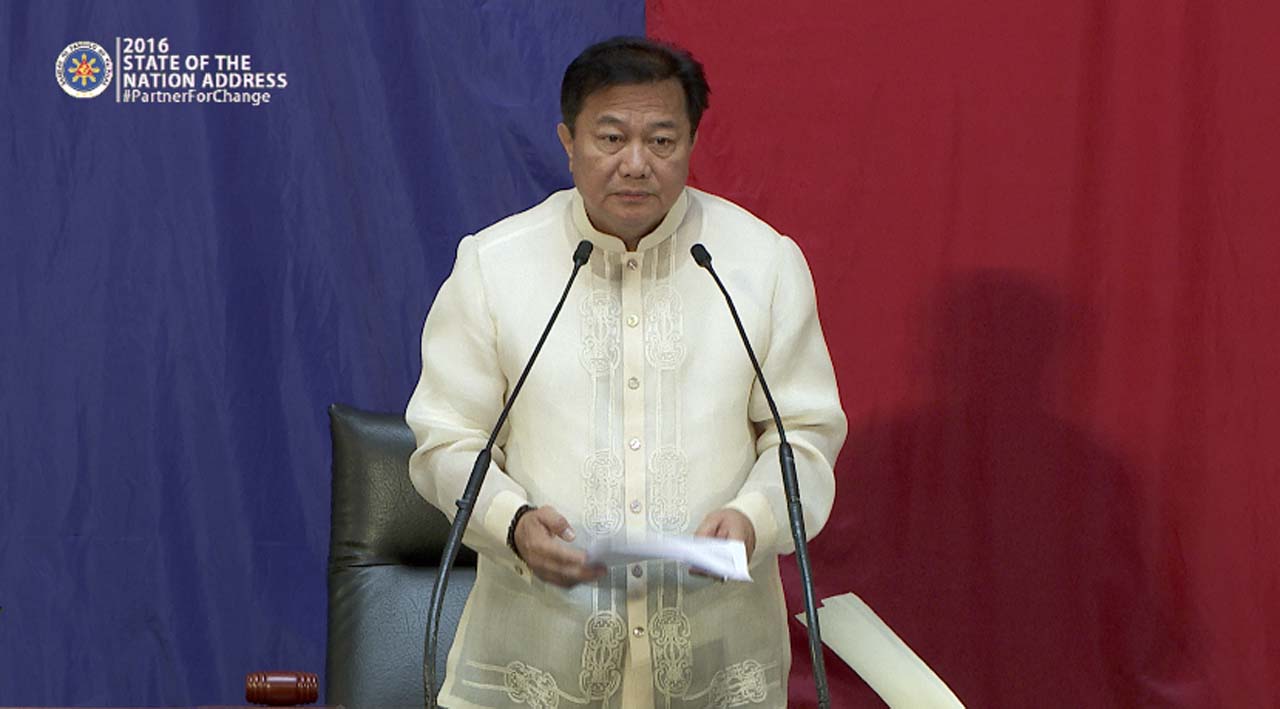 MANILA, Philippines – The reimposition of the death penalty, addressing problems in the country’s cities, and federalism are at the forefront of the legislative agenda of the House of Representatives.

Davao del Norte 1st District Representative Pantaleon Alvarez gave his marching orders to the 292 members of the House after winning the speakership on Monday, July 25.

In his acceptance speech during the opening of the 17th Congress, Alvarez once again called on Congress to support the President’s priority measures:

He also called for the creation of a Constitutional Convention to pave the way for federalism as the “holy grail” of the government’s legislative agenda. (READ: Alvarez eyes Con-Con bill in September)

“The unitary and highly centralized form of government was imposed on us by the colonizing power of Spain and the United States of America, and for one reason – total control over the country. The results have been stunted growth in about 80% of our country, and the over-dependence of local government units upon the national government,” said Alvarez.

“The power of imperial Manila over the rest of our nation has to end. Our LGUs (local government units) need to be allowed to stand on their own feet and to develop and grow as they see fit, subject only to standards that the national government may set,” he added.

According to Alvarez, Duterte’s legislative agenda seems “overly ambitious” to some people, but he said this is only because of “inertia.”

“A body at rest tends to rest indefinitely and will resist movement. But we should not be like the admiral who, because he feared the big waves of the Pacific and the journey into the unknown, dropped anchor in a harbor and held office there,” he said.

He also said that the “genuine change” that President Rodrigo Duterte wants for the country would be impossible to achieve if he acts alone.

“That is why we in the legislative branch of government have our work cut out for us. We must give the President the necessary legislation which will be his tools to effect meaningful and genuine change. In sum, we too must be instruments of change,” added Alvarez. (READ: Alvarez to PDP-Laban lawmakers: Bring back trust in Congress)

The secretary-general of the Duterte’s Partido Demokratiko Pilipino-Lakas ng Bayan (PDP-Laban) was elected as House Speaker with an overwhelming majority of 251 votes.

“The only thing we should fear is the fear of change itself. Instead, let us embrace change. Let us be instruments of change and apply the other side of the law of inertia – a body on the move tends to move indefinitely. Starting today, then, let us roll up our sleeves and get to work,” he said.

He said Congress must revise Republic Act Number 9184 or the Government Procurement Act, which he said, has “discomfited” both the public and private sectors.

“Unlike a free-size shirt, the Procurement Law should not be a one-size-fits-all kind of law. We should put in enough flexibility to address all foreseeable possibilities that may arise in the course of government procurement,” said Alvarez.

The House Speaker also urged lawmakers to simplify the income tax collection process to encourage Filipinos to pay their taxes.

“Tax laws have become so complicated that they are exploited by corrupt BIR officials in order to extort money from the taxpayers,” he said.

Legislators were also ordered to pass a measure that would require mining companies to secure a legislative franchise before being allowed to operate.

“That way, their activities would be subject to legislative oversight and their franchises can be revoked by the oversight body instead of a probably bribable bureaucrat in an obscure DENR office if they violate the terms and conditions thereof,” said Alvarez.

For the labor sector, the House Speaker is seeking to increase the penalties for companies who are refusing to pay the minimum wage to workers. He also expressed the need to “look into” ending labor contractualization.

Alvarez also said that senior citizens and persons with disabilities should be given the option to avail of the procedures for absentee-voting during the elections.

“The fact that you are elderly or in a wheelchair should not disenfranchise you from participating in the most sacred exercise of a democratic nation – electing your leaders into office,” he said. – Rappler.com