Duterte opens up on presidency, SONA at media dinner

Jul 26, 2016 8:32 AM PHT
Pia Ranada
Facebook Twitter Copy URL
Copied
President Duterte invites journalists who covered him during the campaign to a private dinner in Malacañang Park after his SONA 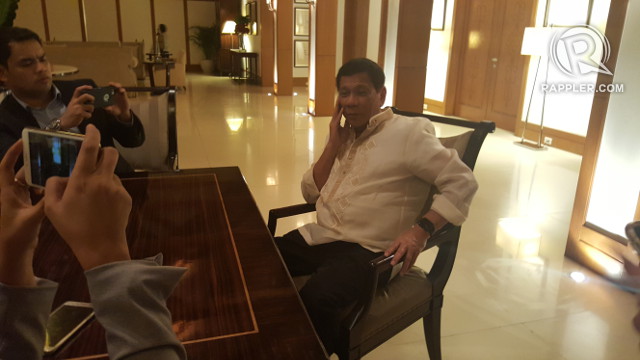 MANILA, Philippines (UPDATED) – Is President Rodrigo Duterte thawing out at last when it comes to his regard for independent media?

Small steps seemed to have been taken Monday night, July 25, when Duterte invited select journalists to a private dinner in the Malacañang Golf Club House, just a few steps from his official Manila residence, Bahay Pangarap, in the Presidential Security Group Compound.

Duterte arrived by chopper straight from cocktails with leaders of militant groups after his State of the Nation Address (SONA) in Batasang Pambansa in Quezon City. He strode in, security entourage in tow, with his barong tagalog partially unbuttoned, like a breadwinner coming home from a long day at work.

The invited media were mostly journalists who had covered Duterte since the start of the 2016 presidential campaign. They include the author of this article, Mia Reyes of TV5, Ina Andolong of CNN Philippines, Doris Bigornia of ABS-CBN, and Ian Cruz and Cedric Castillo of GMA-7. Also present was Mindanews Editor-in-Chief Carol Arguillas and Davao-based Rappler correspondent Editha Caduaya.

Entering with Duterte was a tired but still cheerful Honeylet Avanceña, his common-law wife, and his ever-present aide and now Secretary Christopher “Bong” Go.

There was no cold treatment or stinging criticism of media that night. Instead, Duterte faced the journalists with the candor and easy-going humor last observed in those famous late-night press conferences during the transition period after his election.

Perhaps his candor also had something to do with the absence of video cameras which Go had specifically requested from the journalists present during the talk.

But Duterte gave permission to the media to use some of the information in the conversation for publication, as well as photos and videos of some parts of the event.

So what was it like to give his first State of the Nation Address? asked the media.

The President said he had a hard time reading the teleprompter, hence the frequent deviations from his speech and the erroneous reading of some words and names.

“Naduling ako, nagdouble vision ako (I got cross-eyed, I got double vision),” he said, adding that his glasses, which he only started wearing recently, may have contributed to his seeing double.

Duterte also took time to reflect on his first month as Philippine president. He is still adjusting to the “enormity” of the task facing him for the next 6 years, even saying he regrets running.

Duterte, fond of lewd jokes especially when talking to friends, could not resist saying a couple that night.

“‘Tangina, sa bigat ng problema ko, naging impotent na ako,” he said with a chuckle. (Son of a whore, my problems are so heavy that I have become impotent.)

Duterte, a politician for 3 decades, said his years as Davao City mayor have been more fulfilling than his presidency so far.

The mayor known to have been hands-on with his beloved city misses direct interaction with his constituents which, given the extraordinary security measures that come with being president, happens less frequently.

(In the sense that it’s more fulfilling when you’re a mayor because you’re eyeball-to-eyeball with your constituents. “So, did he live?” “Thank you, Mayor.” “Give him money. How much does he need?” They always had to coordinate with me.)

Once a month press conferences?

Inevitably, his policy with independent media was brought up. Would he make good on his promise never to give a press conference until the end of his term?

Duterte said he is open to once a month press conferences with certain media groups.

But he explained that one reason why media are not given as much access as they had during the campaign is because his priorities have changed.

During the first few months of the presidential campaign, Duterte relied heavily on free media coverage by independent media since he lacked the funds to pay for television and radio advertisements. But now that he is president, media mileage is the least of his worries. 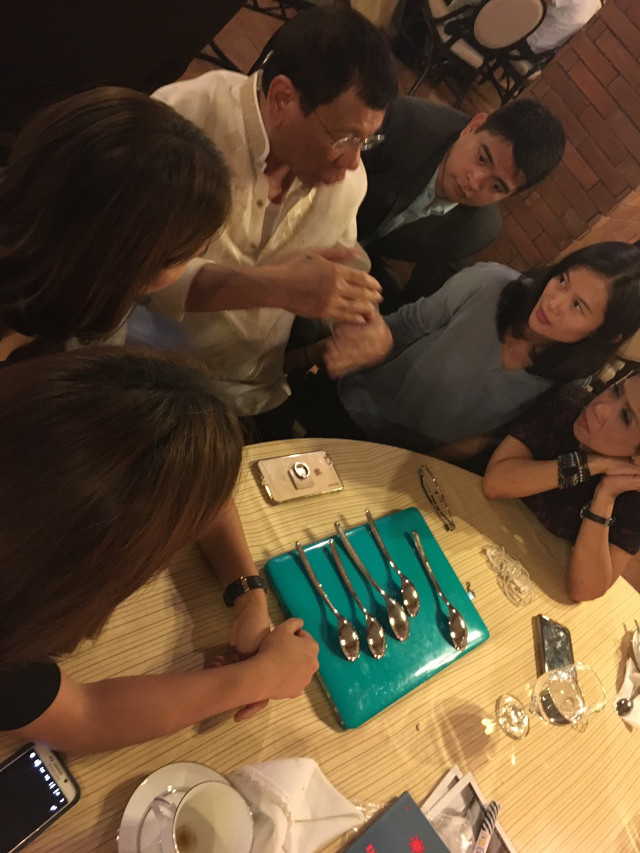 During the talk, Duterte explained his view on carbon emissions and the West Philippine Sea dispute using a set of spoons and table napkins. He also got a call from his youngest daughter Kitty who asked him the content of his SONA for her school assignment due the next day.

For the rest of the night, Duterte sang 2 or 3 songs with the live band especially set up for the occasion. The moment reminded journalists of those nights in After Dark, Duterte’s favorite bar in Davao City where he would take guests and journalists after a long day of meetings.

Duterte and Avanceña then gave the journalists a quick tour of the Bahay Pangarap which they now call Bahay Pagbabago.

Media were allowed to take photos and videos of the living room but not of his bedroom and bathroom.

Also reminiscent of his no-holds-barred press conferences was Duterte’s fondness of talking that night. Many goodbyes were said, only to be thwarted by a last-minute joke, anecdote, or explanation of his, inspired by the moment.

Journalists left with the notion that though Duterte has brought change to Malacañang, some things about the man himself never change. – Rappler.com