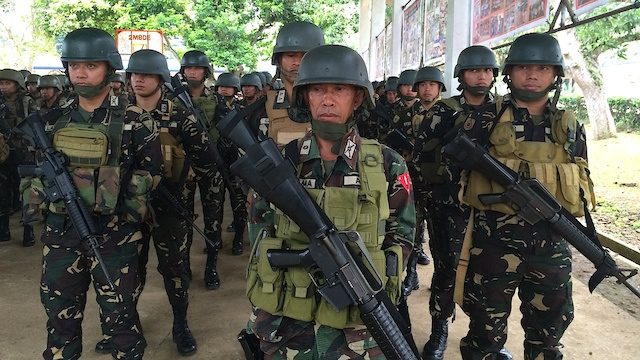 Facebook Twitter Copy URL
Copied
The ceasefire declaration takes effect immediately but the troop pullout will take time to complete as government forces would have to walk out of their areas of operation, say military officials

CAGAYAN DE ORO CITY, Philippines – A day after President Rodrigo Duterte declared a unilateral ceasefire with communist rebels, government troops are preparing to pull out from areas where they have counterinsurgency operations.

Captain Joe Patrick Martinez, spokesperson of the 4th Infantry Division, told Rappler that Major General Benjamin Madrigal, 4th ID  commander, sent out the guidance for the troop pullout on Tuesday, July 26 or a day after Duterte’s ceasefire declaration in his State of the Nation Address, but added this cannot be completed right away.

“The pullout will take time since troops deployed will have to walk out of the areas of operations,” he said.

Madrigal said in a statement that the military’s core functions – law enforcement support operations,  security of vital installations, and the conduct of  peace and development engagement – will continue even with a ceasefire in place.

“There will be no military offensive operations against the NPA. However, it does not stop us to continue our support to the law enforcement operation being conducted by the PNP,” he said.

This includes “conduct of checkpoints to deter any hostile activities in the area, secure all vital installations, and support to the Bayanihan activities or the Whole-of-Nation Initiatives that are jointly undertaken by all stakeholders to help improve the living conditions of our fellow countrymen,” Madrigal said.

As had been the practice in the past, government troops will remain vigilant despite a ceasefire declaration, he added.

“Moreover, we cannot let our guard down after the said declaration. We will remain vigilant in our respective area of responsibility,” Madrigal said. – Rappler.com