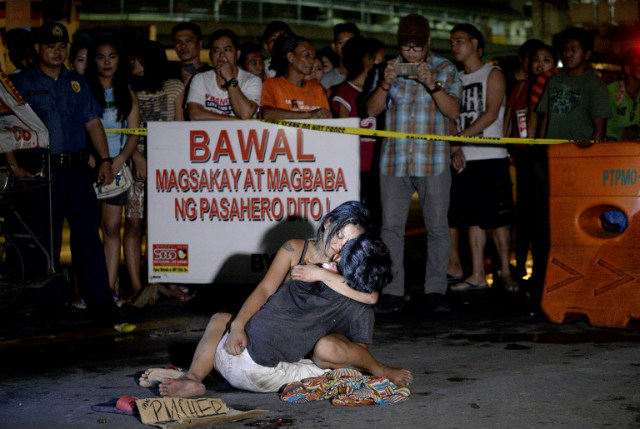 MANILA, Philippines – Philippine President Rodrigo Duterte criticized a broadsheet for publishing the photo of a slain drug suspect and his wife in a scene that resembled Michelangelo’s Pietà.

Duterte did not name the broadsheet in his first State of the Nation Address (SONA) on Monday, July 25.

The broadsheet that published this as its banner photo on Sunday, July 24, was the Philippine Daily Inquirer. The image was taken by photojournalist Raffy Lerma.

Below it was the banner story titled, “Church: Thou Shall Not Kill,” which was about a Catholic movement against extrajudicial killings. (READ: Manila bishop on killings: Crime can’t stop crime)

Lerma’s photo evoked images of Michelangelo’s Pietà, a sculpture dating back to 1499 that shows Mary carrying the dead body of her son, Jesus Christ.

Duterte himself acknowledged the resemblance in his SONA on Monday.

(Then there you are, sprawled, and you are portrayed in a broadsheet like Mother Mary cradling the dead cadaver of Jesus Christ. These people, we’ll be doing dramatics here.)

The President said, “Let us be clear with each other. I am for the comfort and the welfare of the Filipino.”

Police say nearly 300 drug suspects have died since Duterte took office. Data from the Philippine National Police (PNP) show at least 293 suspects were killed from July 1 to 24, 2016 only. This number includes those killed in police operations and excludes those slain in apparent extrajudicial killings around the country.

Because of this, Human Rights Watch on Tuesday, July 26, urged US Secretary of State John Kerry to tell Duterte to investigate the recent killings of drug suspects in the Philippines.

The Catholic Church has also warned against rising “vigilantism” in the country. (READ: Manila bishop on killings: Crime can’t stop crime) – with reports from Agence France-Presse/Rappler.com