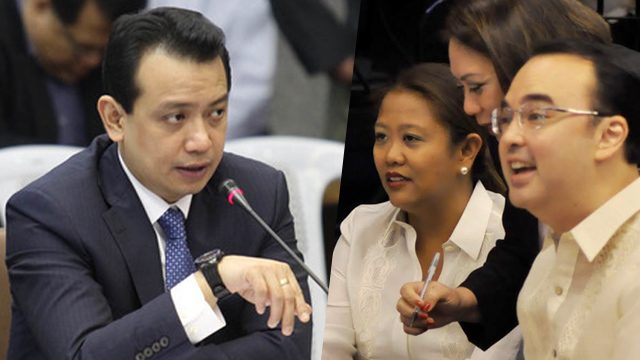 MANILA, Philippines – It was the first working session for the new Congress, yet some things from the past just wouldn’t fade quietly.

As fate would have it, 3 senators who had had clashes were left with no option but to sit beside each other on Tuesday, July 26: Nancy Binay, Alan Peter Cayetano, and Antonio Trillanes IV.

The male senators were part of the trio that accused and investigated Binay’s father, then-Vice President Jejomar Binay, in what was the longest-running Senate probe. The investigation into alleged corruption when the older Binay mayor of Makati City was believed to have frustrated his presidential bid.

Binay and Cayetano were originally seated on the front row. But since the new Senate leaders have to be positioned there, the two senators were moved to the back, where Trillanes was sitting. At some point, Cayetano sat with Binay while Trillanes opted to sit somewhere else.

Binay was shocked upon finding out that she would be seated with the two senators who led the marathon investigations against her father and family over corruption allegations. (READ: Trillanes: ‘I have every right to say Binay is corrupt’)

(Well, originally, I was a bit shocked because I expected that my seatmates for today would be Senator Bam or Senator Sonny because I’m used to us following the alphabetical order.)

“Medyo nagulat lang ako. Wow, is this a test? Sinusubok ‘ata ako ni Lord,” Binay said in jest. (I was just a bit suprised: Wow is this a test? I think the Lord is testing me.)

Binay said she has moved on from the past, as she reiterated she harmed no one. (READ: TIMELINE: Binay’s plunder case, one year after)

While the seating arrangement was only temporary, Binay said she could live with that even if it were permanent.

(It’s just temporary. But if it were permanent, I guess it’s fine with me because I’ve been sitting there for a while now, but the two have been avoiding me. My conscience is clear, I did not hurt anyone. I did not do anything wrong to them. They don’t want to sit beside me.)

If there’s anything good that came out of the awkward situation, Binay said it was her “small talk” with Cayetano. She even joked it seemed like it was more awkward between party mates Cayetano and Trillanes.

Trillanes has been one of the staunchest critics of President Rodrigo Duterte since the 2016 campaign period. Cayetano was the running mate of Duterte.

(It’s difficult when you’re carrying anger, hurt. I think the people who keep negative things are more prone to get sick. I don’t need that kind of stress. Slowly we will get there. Senator Alan and I sat beside each other, we had small talk. I think that’s one step forward. But Senator Trillanes hasn’t sat down there yet, I don’t know about him.)

Cayetano, for his part, told reporters that he and Binay made light of the awkward situation.

(I asked the others, are you punishing me or those two beside me? It’s just temporary, they said. Senator Binay and I laughed about it.) – Rappler.com