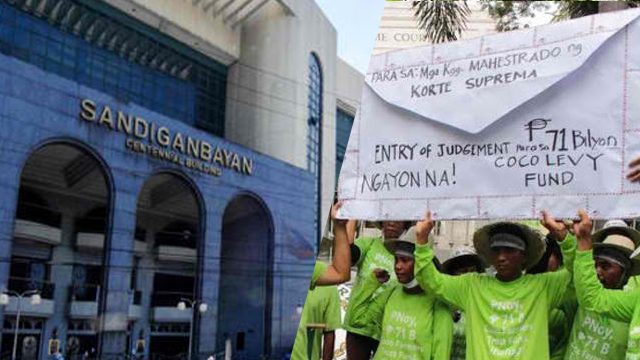 Facebook Twitter Copy URL
Copied
The cases have been pending for 29 years, but the anti-graft court's resolution says the cases will still need to go to trial

MANILA, Philippines – The Sandiganbayan Second Division on Tuesday, July 26, denied a bid from the government for the early resolution of two cases involving the coconut levy funds.

Civil Cases 0033-B and 0033-D were among the 8 subdivided cases on the coconut levy funds.

These two cases are offshoots of Civil Case Number 0033, which was filed in July 1987 and divided into separate suits in 1995 under the recommendation of the Sandiganbayan. They were divided because of the complex nature of the transactions and the number of entities, from companies to individuals, involved.

Case No. 0033-D, meanwhile, refers to companies formed with the aid of the Coconut Industry Development Fund (CIIF), specifically the United Coconut Oil Mills (Unicom), as well as 16 other CIIF mills, which include their cash assets and properties.

The motions for summary judgment were filed by the Presidential Commission on Good Government (PCGG) and the Office of the Solicitor General (OSG).

They claimed that the defendants – including businessman Eduardo Cojuangco Jr, Senator Juan Ponce Enrile, and Philippine Coconut Producers Federation (Cocofed) members – used coconut levy funds to enrich themselves by using their position to garner “excessive salaries, allowances, bonuses and other emoluments for their own personal benefits.”

The PCGG-OSG said the funds were also used to acquire shares in other companies.

According to a joint resolution written by Associate Justice Teresita V. Diaz Baldos and concurred with by associate justices Napoleon Inoturan and Michael Frederick Musngi, the two cases will still need to go to trial even if they have been pending in court for 29 years.

The Sandiganbayan said, “While it is strongly desired that these so-called ill-gotten wealth cases that have long hounded the court dockets be terminated with dispatch, the remedies of summary judgment and/or judgment on the pleadings based on the foregoing submission of the plaintiff are unfortunately improper.”

The Sandiganbayan explained that a partial summary judgment cannot be rendered due to pending genuine issues that could only be decided during a trial. It added that there has been no absolute decision regarding the ownership funds, despite the Supreme Court saying the funds were “prima facie public funds.”

“Plundering the wealth of the country is a serious allegation, the truth of which must be carefully unveiled and not just summarily resolved,” the court said. – Rappler.com