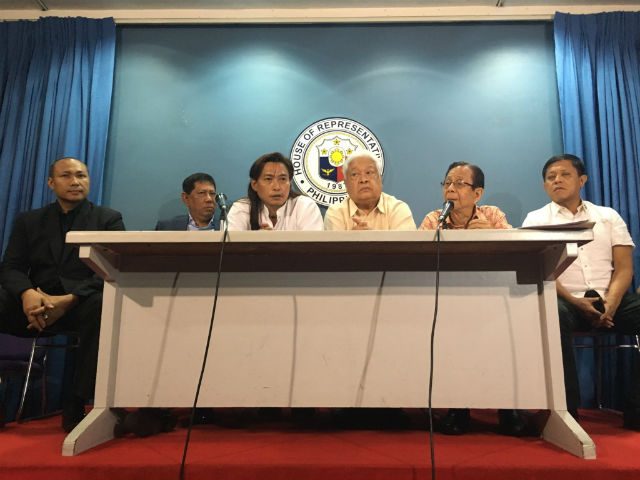 MANILA, Philippines – The drama over the House minority leadership is not over, after allies of Ifugao Representative Teddy Baguilat Jr said they plan to contest Quezon 3rd District Representative Danilo Suarez’s victory before the Supreme Court (SC).

“It’s an obligation on our part to question this before the Supreme Court. Our legal team is studying our options,” said Caloocan City 2nd District Representative Edgar Erice on Wednesday, July 27.

Seven of the 8 representatives who supported Baguilat’s claim as minority leader called for a press conference minutes after Suarez was elected for the position.

Capiz 1st District Representative Emmanuel Billones is an ally of Baguilat as well but he was not present on Wednesday.

Baguilat questioned how Suarez can be a proper minority leader when he is among the principal co-authors of the pet bills of President Rodrigo Duterte’s administration.

These include measures on the reimposition of the death penalty for heinous crimes and giving Duterte emergency powers to address traffic, among others.

He maintained that he and his allies will not be independent lawmakers but rather, they will form the “real and authentic minority.”

“We will continue our role as fiscalizer,” said Baguilat.

To become minority leader, a representative must vie for the speakership. Newly-elected House Speaker Pantaleon Alvarez won the race with 251 votes. Baguilat came in second with 8 votes and Suarez with 7 votes.

Fariñas, who heads the 251 members of the House supermajority, also reasoned that everyone who did not vote for Alvarez as speaker – even those who abstained – are part of the minority.

Suarez’s bid for minority leader is also allowed because he said he only voted for Alvarez out of House tradition.

Suarez said on Wednesday that he immediately wrote a letter to the House Speaker at the end of Monday’s session so he could join the minority and therefore run for its leadership post.

On Wednesday, Daza said he is saddened that the supermajority seems to be controlling even the minority bloc.

“Itong gawain ng supermajority ay gawain ng mga trapo! We are turning the House of Representatives into a House of trapos!” said Daza. “Trapo” is short for traditional politician.

(What you want to say, Raul, is that this a blatant attempt to control the House. They already hold the supermajority, they also control the minority!)

The lawmaker earlier warned against a “subservient” minority bloc should it be led by Suarez.

According to Lagman, the 20 lawmakers who abstained from voting but insisted they are members of the minority also “bastardized” the process.

Baguilat and his allies did not attend the minority bloc’s elections on Wednesday.

Asked if this is a sign of protest from Baguilat’s group, Suarez said: “I don’t know. They were invited today.” – Rappler.com