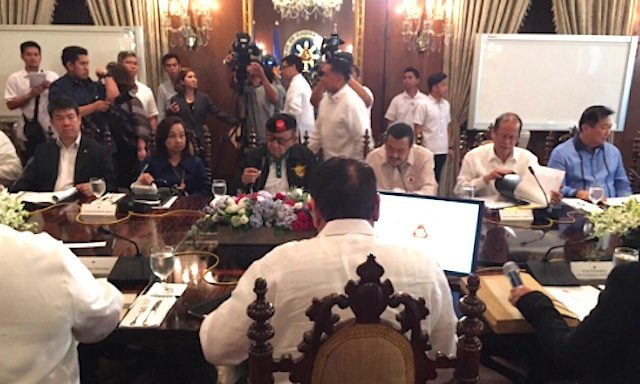 MANILA, Philippines – It was a sight to behold: the country’s former presidents and the incumbent gathered in one table in Malacanãng to pitch their ideas on a dispute that an arbitral tribunal had ruled in favor of the Philippines.

They were not in complete attendance during the first State of the Nation Address of their latest successor, and have not been seen in one gathering for quite some time, but on Wednesday, July 27, former presidents Benigno Aquino III, Gloria Macapagal-Arroyo, Joseph Estrada, and Fidel Ramos joined President Rodrigo Duterte at the National Security Council (NSC) meeting.

Past presidents are members of the NSC which Duterte, as council chairman, convened to discuss the recent Hague ruling on the Philippine claim in the West Philippine Sea (South China Sea), among other issues.

It was not immediately known how the seating arrangement was made, but Aquino and Arroyo were not seated beside each other. (READ: Aquino, Arroyo snub each other at NSC meeting)

Ramos and Estrada sat directly across Duterte at the Aguinaldo State Dining Room. Aquino was beside Estrada while Arroyo sat next to Ramos.

Just last week, Arroyo walked free from hospital arrest after the Supreme Court cleared her of plunder charges. Her camp believes she is a victim of political persecution by the Aquino administration.

Malacañang earlier said that Duterte would lead a “multipartisan dialogue in order to agree on vital policies and strategies on important matters, including the recent ruling of the Permanent Court of Arbitration on the West Philippine Sea” during the NSC meeting.

Aquino and Arroyo had taken opposing approaches to the dispute with China.

The Arroyo administration was seen as friendly towards China in exchange for developmental funds, and even entered into the controversial Joint Marine Seismic Undertaking with China and Vietnam. (READ: Why China prefers Arroyo over Aquino)

Aquino, for his part, will go down in history as the president who brought China to court, and won the case too.

During his term, Aquino did not convene the full NSC even after repeated calls by lawmakers, as well as Ramos, amid the threat posed by China. He said then that he had called a “modified” NSC meeting attended by Ramos, then Senator Juan Ponce Enrile, and members of the judiciary.

Others in attendance at the full NSC meeting on Wednesday were Congress leaders including Senate President Aquilino Pimentel III and Speaker Pantaleon Alvarez, and key Cabinet officials. – Rappler.com