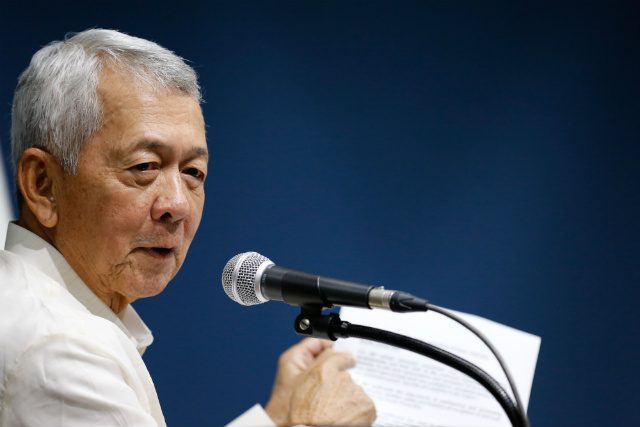 Yasay said the Philippines only wanted ASEAN to “recognize” the Philippines’ case against China as “in accordance” with international law, particularly the 1982 United Nations Convention on the Law of the Sea (UNCLOS).

The Philippine Department of Foreign Affairs (DFA) on Monday said Yasay sought an ASEAN statement “supporting the legal and diplomatic processes being pursued by the Philippines.” The legal process refers to the case filed by Manila against Beijing.

Yasay, however, said in a news conference on Wednesday: “We, the Philippines, had never urged or asked the international community, particularly ASEAN, to support us in the merits of our case. We simply asked them to recognize that the action we took in peacefully resolving our dispute with China was done in accordance with the principles of international law and under the provisions of UNCLOS.”

It is unclear how asking ASEAN “to recognize” the Philippines’ legal action, “in accordance with the principles of international law,” can dodge a reference to “the merits of our case.” After all, the case is over, and the Philippines won.

An arbitral tribunal in The Hague, Netherlands, has ruled to invalidate China’s expansive claim over the South China Sea, parts of which the Philippines claims as the West Philippine Sea.

In any case, Yasay said, the Philippines’ position allowed ASEAN to come up with a “unified statement” on the South China Sea dispute during the 49th ASEAN Foreign Ministers’ Meeting in Vientiane, Laos.

Yasay was referring to the joint communiqué issued by ASEAN foreign ministers on Monday, July 25. In this joint communiqué, the ASEAN ignored the Hague ruling and referred to common issues involving the South China Sea, such as China’s land reclamation activities.

Before ASEAN released this statement, the DFA issued a press release saying Yasay wanted the support of ASEAN.

The DFA pointed out on Monday: “Secretary Yasay said an ASEAN statement supporting the legal and diplomatic processes being pursued by the Philippines toward the peaceful resolution of the dispute, without taking sides, would not only reflect ASEAN acknowledgment and respect for a rules-based order, but also will reaffirm ASEAN’s ‘centrality and solidarity in the regional security architecture that would enhance ASEAN’s voice and growing influence in the international community.'”

The DFA also quoted Yasay as saying it “is a clearly established fact” that the Hague ruling is “final and binding to all parties concerned.”

He also said the decision has “significant implications for the entire region, not just the coastal states bordering the South China Sea.”

In a complete turnaround, Yasay later told reporters in Laos, “The other countries are not part of our filing of the case before the arbitral tribunal, so why would we insist that it be put in the ASEAN statement?”

This was quoted by Agence France-Presse in a story on Tuesday, July 26.

On Wednesday, Yasay denied having said this.

At the same time, Yasay on Wednesday issued another statement that gave mixed signals on the Philippines’ position.

On the other hand, Yasay admitted later in the news conference that he “pushed for the inclusion” of the Hague ruling in ASEAN’s joint communiqué.

He said this after a journalist asked him on Wednesday if he pushed for the inclusion of “a clear reference to the arbitral ruling” in the ASEAN joint statement.

Yasay answered: “Yes, vigorously. I pushed for the inclusion and mentioning of the arbitral tribunal award.”

“Again, this was a diplomatic tack that had to be made,” he continued. “But we knew that there was middle ground without compromising the rights of the Philippines and the award that was recognized by the arbitral tribunal.”

Experts count on pressure from the international community, including ASEAN, to eventually force China to heed the ruling on the South China Sea. There is no international police to enforce the ruling. (READ: ‘Game of diplomats’ begins in West Philippine Sea)

China, however, rejects the “internationalization” of the Philippines-China dispute, saying it should be settled by Manila and Beijing alone. – Rappler.com