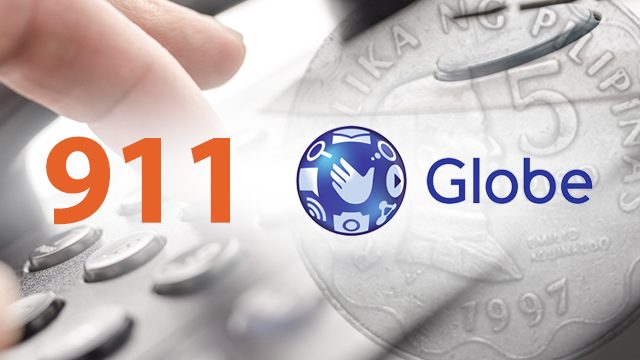 MANILA, Philippines (UPDATED) – Globe Telecom Incorporated on Wednesday, July 27, announced it will charge an additional P5 per call on top of the regular voice charges for their subscribers calling the 911 hotline.

The idea, however, was actually mandated by government, according to Globe General Counsel Froilan Castelo.

“The government asked us to pattern 911 with 117…We will be strictly complying with the directives of the government [when it comes to] implementing the hotlines to the public. This includes whether 911 and 8888 will be free of charge or not,” Castelo said on Thursday, July 28.

This was echoed by National Telecommunications Commission (NTC) Deputy Commissioner Edgardo Cabarios, saying Globe is pertaining to its existing agreement with the Department of the Interior and Local Government (DILG).

“I think Globe is referring with its existing agreement with DILG on the hotline 117. Under the existing agreement, the charge will go to the maintenance of the department’s command or contact center,” Cabarios clarified in a phone interview.

NTC is in charge of ensuring the connectivity of the telcos for emergency hotlines.

Cabarios shared that the government is looking at the possibility of making it free of charge.

“I think there is a directive by the President [Rodrigo Duterte] to make it free of charge. All stakeholders will discuss it. Telcos will be the one to announce,” Cabarios said.

Presidential Communications Secretary Martin Andanar earlier announced that a 24-hour hotline for citizen complaints and an emergency hotline will go live in the Philippines by August.

This is part of President Rodrigo Duterte’s campaign promises during the election season, vowing to implement Davao City’s world-class 911 emergency response center on a national scale by upgrading the equipment used for law enforcement and response.

According to Andanar, citizens can call the “8888” hotline to report corrupt officials, underperforming government personnel, and unfinished government projects.

On the other hand, the current Patrol 117 emergency hotline will be replaced by a 911 number, which will link to the Nationwide Emergency Response Center.

As mandated by government, Castelo said that the telecommunication company is prepared to relay voice calls for the 911 and 8888 hotlines starting August 1.

“We are also expediting migration of our system to immediately enable transmission of SMS or text messages thru 8888 and we are confident that we will be able to achieve this target within the timeframe of 30-45 days given to us by the government,” he added.

The emergency hotline had proven effective in Davao City, enabling the speedy response of police, firefighters, and medical personnel during emergencies. Will it yield the same positive results when implemented on a national scale? – Chrisee Dela Paz/Rappler.com