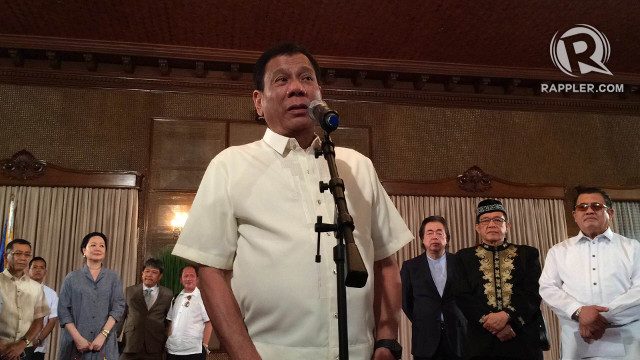 MANILA, Philippines – Two days after suspending the unilateral ceasefire with communists, President Rodrigo Duterte said he still hopes peace talks between the Philippine government and the Left would push through.

“I hope we can proceed with the talks with the Communist Party of the Philippines (CPP),” said Duterte on Monday, August 1, during the oath taking of new government appointees in Malacañang Palace.

The President said it’s possible his administration and the CPP simply had a misunderstanding about the New People’s Army ambush on July 27 that prompted him to lift the ceasefire.

“We are hoping that we can just talk. Maybe we did not understand eah other,” said Duterte.

Pushing through with the peace talks would allow him to pursue his campaign promise of bringing peace to the country.

“Best way really is to talk again and maybe find out if it’s reachable or beyond our reach,” said Duterte.

The government and CPP were slated to resume peace talks on August 20 in Oslo, Norway.

Asked by media if he would reinstate the unilateral ceasefire, Duterte said he has not yet made a decision.

“I will see if I will also be happy to reinstall the ceasefire,” he said.

The CPP says it is ready to declare a ceasefire on August 20 if the Duterte administration issues one too.

Sison said the CPP was already preparing to reciprocate the government’s ceasefire declaration at 8 pm – an hour after the President announced that he was lifting the ceasefire order.

Duterte had earlier given them until 5 pm on July 30 to declare their own ceasefire.

Though the President took a different tone with the communists in saying he hopes for the August 20 peace talks to push through, he expressed his dismay with the CPP in portraying the government as the bad guy in the situation.

(I was the one who declared the ceasefire, I suffered a casualty, and the government is the bad guy? I declared a truce so the soldiers went down from the mountains, and then they were ambushed.)

The government’s next steps with the peace talks will be discussed during the Cabinet meeting scheduled to happen Monday afternoon in Malacañang.

Duterte said he would ask for the advice of peace process advisers Jesus Dureza and Silvestre Bello III.

“I will think about it, sleep on it perhaps, then I will make a deision,” he said.

Because of Duterte’s lifting of the ceasefire, police and military are back on high alert with directives to “neutralize all threats to national security,” according to Armed Forces of the Philippines Chief Ricardo Visaya. – Rappler.com