Aug 3, 2016 8:13 PM PHT
Pia Ranada
Facebook Twitter Copy URL
Copied
After his appointees heap criticisms on De Lima, Duterte comes to her defense and says he would do the same if he were in her position 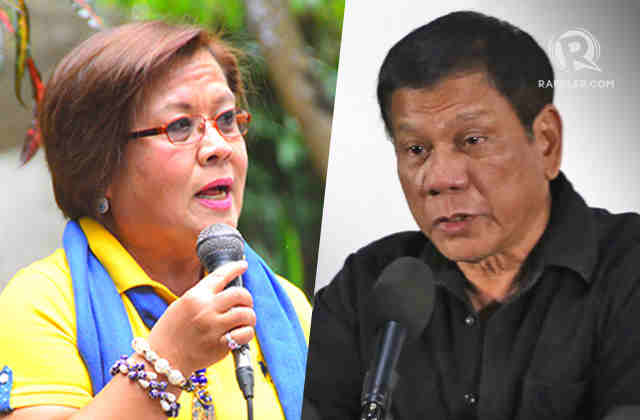 His defense of De Lima comes after Presidential Spokesman Ernesto Abella said the lady senator is “welcome” to begin the Senate probe in mid-August.

Duterte mentioned De Lima after telling his audience about how he was the “favorite whipping boy” of human rights groups when he was Davao City mayor. Even then, De Lima, who used to be chairperson of the Commission on Human Rights, was among Duterte’s fiercest critics.

After saying it’s De Lima’s job to look into the surge of drug-related killings, Duterte said he would do the same if he were in her position.

“Kasi kung ako nandiyan, yayariin din kita (Because if I was in that position, I will also pin you down),” he said.

Duterte’s defense of De Lima is unexpected, given the many times he called her out for investigating his involvement in extrajudicial killings when she supposedly did little to curb the spread of drugs in the New Bilibid Prison when she was justice secretary.

The only warm moment between the two occurred moments before Duterte’s first State of the Nation Address when he shook her hand on his way to the podium, a gesture which also surprised De Lima. – Rappler.com