Duterte tags Roberto Ongpin as ‘oligarch’ he wants to destroy 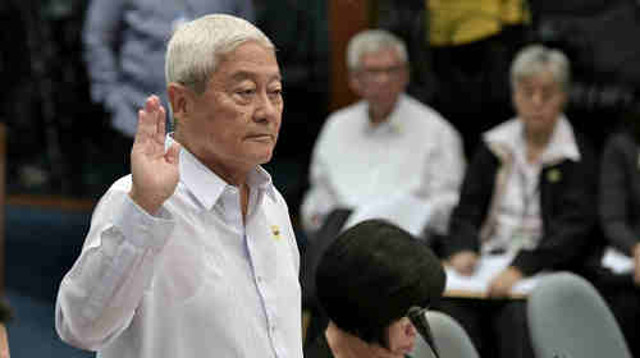 MANILA, Philippines – President Rodrigo Duterte singled out Filipino tycoon Roberto Ongpin as an example of the oligarchs his administration wants to do away with.

“Ang plano talaga is, destroy the oligarchs that are embedded in government. ‘Yan sila, I’ll give you an example, publicly – Ongpin, Roberto,” said Duterte on Wednesday, August 3, in front of election volunteers in Malacañang Palace.

(The plan is to destroy the oligarchs that are embedded in government. I’ll give you an example, publicly – Ongpin, Roberto.)

Ongpin was one of the 50 richest Filipinos in 2015 according to Forbes Magazine. That year, he supposedly boasted a net worth of $900 million.

The SEC had barred the businessman from joining the board of any publicly listed company, and fined him P174 million for insider trading. Ongpin sits as chairman of two listed firms – PhilWeb Corporation and Atok Big Wedge Incorporated.

Duterte described Ongpin as a businessman close to people in power and implied he used his political influence to strengthen his businesses. Ongpin had been Marcos’ trade secretary.

“Malakas kay Marcos, malakas siya and successful. [During the time of] Ramos, he was a hanger-on,” said Duterte.

(He had a strong influence on Marcos, he was successful. During Ramos’ time, he was a hanger-on.)

The President, a self-confessed Socialist by heart, derided oligarchs as people who don’t work hard yet earn a lot of money because of their political influence.

(These are the guys who just sit in their airplanes or their mansions. Their money adds up like the fare adding up in a taxi’s meter.)

The President repeated his promise that he will run “a clean government” and that he will continue to battle corruption. – Rappler.com