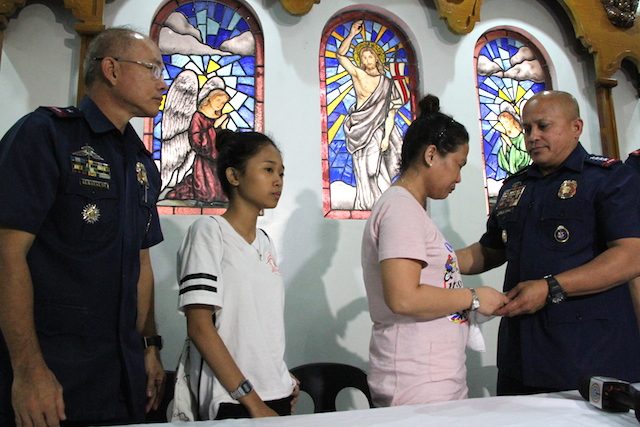 Bumagat was killed early morning Thursday while trying to serve a warrant of arrest on a murder suspect. The police  officeris survived by his wife and young daughter.

“Gusto kong malaman ninyo kung ano yung feeling ng pamilya ng nawawalan ng padre de pamilya. Eh ang pulis nagtratrabaho lang…Tanggap namin na kami ay mamamatay (I want you to know the feeling of a family who has lost the head of a family. The cop is only doing his job. We know that we can die) any time in the course of us performing our job,” the PNP chief said.

(But that’s the problem. There are those who criticize our operations in the war against drugs. We cannot just wait for them to kill us. We need to fight back for our own sake.)

More than 400 drug suspects have died in police operations since July 1, when the PNP formally launched its “intensified” camp song against illegal drugs under the new administration. Most of the time, suspects were killed because they supposedly fought back against law enforcement operatives.

The United Nations Office on Drugs and Crime (UNODC) has also expressed concern over the killings.

The rising death toll has also drawn the ire of several sectors. The Senate and the House of Representatives are set to launch separate inquiries into supposed instances of summary executions during these operations.  (READ: De Lima to Duterte administration: ‘Stop the killings now’)

To this, Dela Rosa said, “The public should understand the threat that we are facing in our day to day existence as officers of the law.”

The PNP chief, who had previously said he is against all forms of extrajudicial killings, said cops should “fight properly.”

“Kung meron mang kaso na darating, harapin natin. Ang importante, kayong mga pulis ay buhay (If there are any cases in the future, let’s face them. What’s important is that your police officers are alive)….Survive in a gun fight),” Dela Rosa added. – Rappler.com