Kerwin Espinosa told: ‘Surrender or your family will be in jeopardy’ 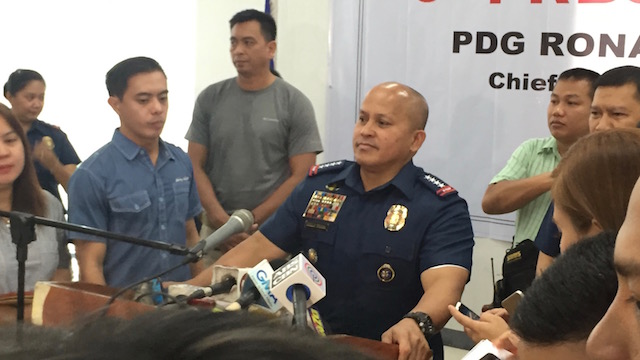 On Friday, August 5, Dela Rosa said the PNP has not yet received any updates on whether Espinosa, allegedly one of the biggest illegal drug operators in Eastern Visayas, will turn himself in after earlier sending surrender feelers to the police.

While Dela Rosa said he won’t give Espinosa a deadline, he warned that he will evict his family out of the “White House” – the PNP chief’s official residence – by Saturday, August 6. (READ: Why Espinosa is staying at PNP’s ‘White House’)

Asked if he would provide security detail for the Espinosas if they request for it, Dela Rosa said he would first mull it over.

Dela Rosa added that he wanted the Espinosas out of the White House because he could no longer stand the smell of cigarette smoke.

On Thursday, Dela Rosa said Kerwin had earlier told relatives that he would  surrender to police upon his arrival in Manila from Malaysia.

President Rodrigo Duterte had accused Kerwin and his father of involvement in the illegal drugs trade and of coddling drug lords.

On August 1, Duterte called on the father and son to surrender, saying he would issue a “shoot on sight” order against the two if they resisted arrest. There is no arrest warrant against them.

The Albuera mayor surrendered to the PNP a day after Duterte issued his warning.

In late July, P1.9 million worth of shabu was discovered in a tennis court near the Espinosa home in a police buy-bust operation. On Wednesday, August 3, 6 men allegedly linked to the mayor were killed in a shootout with police. – Rappler.com