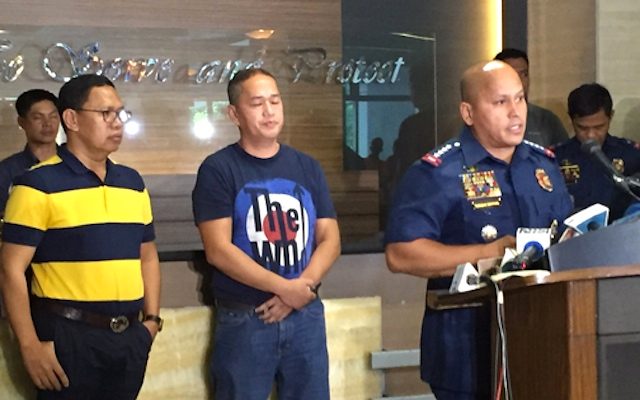 “They voluntarily surrendered to me personally. They heard and received information that they are in the watchlist of the President, they are included in the 23 mayors who are linked to the drug trade,” the PNP chief said.

He said Molok and Abinal told him they were involved in the drug trade in the early part of the decade, but not anymore.

The PNP chief said the two mayors were the downline of Johaira Macabuat alias “Marimar,” former mayor of Maguing, Lanao del Sur and tagged as the “Mindanao shabu queen.”

The two mayors were allegedly involved in drug trafficking in Quiapo, Cavite, and Caloocan City from 2000 to 2002.

The move of the mayor and the former mayor came ahead of the anticipated announcement of President Rodrigo Duterte on some 27 local officials allegedly linked to the drug trade.

“They are no longer involved but before they had been involved [in the drug trade]. They promised to me that…they will be the ones leading the war against drugs in their respective municipalities….They promised to cooperate wholeheartedly,” Dela Rosa said.

After the news briefing, Molok and Abinal were turned over the PNP Criminal Investigation and Detection Group (CIDG) “to get their statement and whatever, we will be able to extract from them for future reference.”

“We will subject them to custodial investigation,” the PNP chief said.

In their brief statements to the media, Molok and Abinal said they both support the Duterte administration’s war on drugs. They are also willing to take a drug test.

Molok also said he will do everything in his power to also get other drug personalities in his town to surrender.

Before dawn on Friday, Duterte told reporters that he has a standing “shoot to kill” order on local officials in his list that do not surrender.

Chief Presidential Counsel Salvador Panelo said on Tuesday that the officials would take the same route as the active and retired police generals that the President had earlier accused of drug links, referring to an investigation of the allegations.

On Monday, Duterte tagged Albuera Mayor Rolando Espinosa Sr and his son, Kerwin, as drug suspects, and demanded their surrender.

Espinosa surrendered before the President’s 24-hour deadline lapsed, and is now temporarily staying at the official residence of Philippine National Police chief Director General Ronald dela Rosa in Camp Crame. His son is reportedly set to surrender as well.