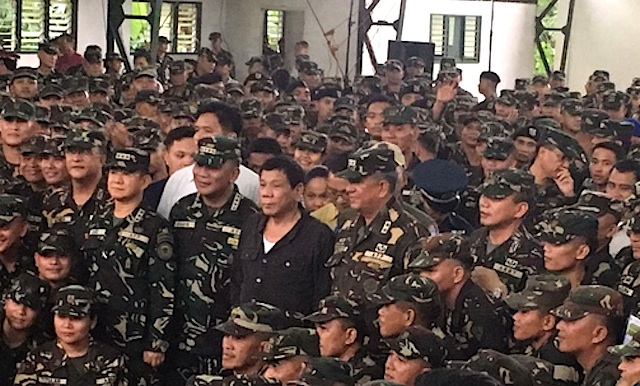 CAPIZ, Philippines – The word war between President Rodrigo Duterte and exiled communist leader Jose Maria Sison, continued on Friday, August 5, as he  accused his former teacher of being “arrogant.”

Duterte launched the tirade two weeks before the government resumption of formal talks with the the National Democratic Front in Norway, and days after Sison called him out for being too hot-headed and imprudent when he lifted the government’s unilateral ceasfire with communist rebels. (READ: Sison calls out Duterte on ‘hasty’ decision to end truce)

(I said, this Sison, bubbles keep forming on his chin, his saliva goes through the screen. You would think he’s a big shot the way he speaks. They can’t even hold on to a barangay.)

At the start of his speech, Duterte mentioned he was saddened by the news that 3 men died in an encounter in Mongkayo, Davao del Norte, but did not specify if it was an encounter with the New People’s Army (NPA).

Duterte criticized the Communist Party of the Philippines (CPP)  for overestimating its power.

“Itong komunista, akala mo kung magsalita (These communists, when they talk you’d think), they are the force to reckon with when as a matter of fact they cannot even occupy a barangay in a single day,” he said.

As if to provoke them, Duterte even claimed leftists in Davao would not have won in past elections if he had not allowed them into his local political party.

“Sa Davao, kung hindi sila magsakay sa aking partido walang manalo doon (In Davao, if they don’t join my party, none of them would have won),” he said.

The CPP’s only “advantage,” he said, is that “they are the ones in the position in the mountains”  which allow them to ambush civilians and the military.

He called the group arrogant and deluded. “Nayayabangan ako sa iyo (I find you arrogant), as if you are really the one in power,” said the President.

Days before, Duterte said he was hopeful that peace negotiations between the government and the CPP’s political wing, the National Democratic Front. would push through despite the NPA ambush that killed a government militiaman in Davao del Norte when the government observed a truce with the rebels.

The resumption of the peace talks is scheduled to take place from August 20 to 27 in Oslo, Norway.

The Duterte administration is currently trying to secure the release of political prisoners so they can participate in the talks.

The Supreme Court denied the Duterte administration’s plea to temporarily release detained CPP chairman Benito Tiamzon and 10 other rebel leaders who have been tapped to join the NDF n its negotiations with government in Oslo.

In the same order,  however, the Court confirmed as valid the bail of 3 other NDF panel consultants – former Bayan Muna Representative Satur Ocampo, Vicente Ladlad, and Randall Echanis.  – Rappler.com