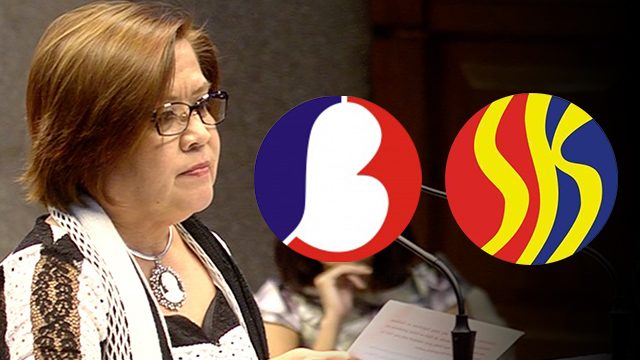 Facebook Twitter Copy URL
Copied
If her Senate bill is passed, the village and youth council elections scheduled for October 2016 will be postponed to October 2018

MANILA, Philippines – Senator Leila de Lima has filed a bill to extend the term of elected barangay (village) and Sangguniang Kabataan (SK or youth council) officials to 5 years, from the current 3 years.

In her Senate Bill 371, she also seeks to allow barangay and SK officials a maximum of two consecutive terms.

This will allow them “to fully implement their programs in their localities,” said the senator in a statement on Tuesday, August 9.

De Lima said they are frontliners in the delivery of basic government services, and the current length of their terms may not be enough to fulfill their duties.

“With this Herculean task, the present term of office for barangay elective officials may be too short for them to fully implement and realize their notable program of peace and development in their localities,” she said.

Her proposal, De Lima added, would also shield the barangay and SK leaders from politics and partisanship stemming from “regular political changes done almost every 3 years corresponding to the term of office among other local and national elected officials.“

This, she said, would “promote continuity of service at the barangay level.”

If her proposed measure would be passed, the scheduled village and youth council polls on October 31 would be postponed as a result, rescheduling it for October 2018.

The postponement, she said,  would provide the Commission on Elections “sufficient time to prepare for the nationwide conduct of the barangay and Sangguniang Kabataan synchronized elections.” The country had the national and local elections only 5 months ago, in May 2016. – Michael Bueza/Rappler.com