Aug 9, 2016 6:15 PM PHT
Patty Pasion
Facebook Twitter Copy URL
Copied
'Marcos' [burial] will not bring healing. It will even cause more pain for us,' adds Susan Quimpo, whose brother was killed during martial law 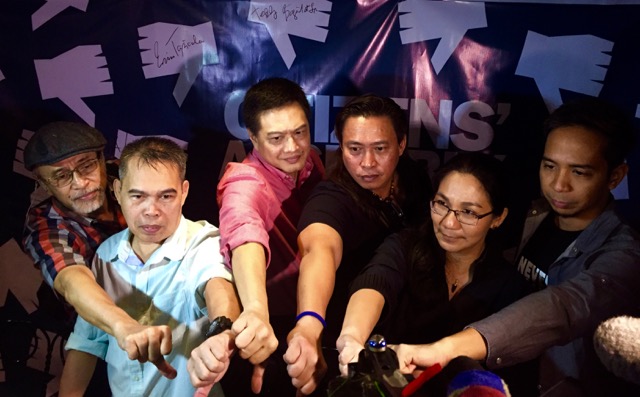 MANILA, Philippines – Activists and families of human rights victims recalled the scars of the past as they appealed to President Rodrigo Duterte to change his mind about the burial of former dictator Ferdinand Marcos at the Libingan ng mga Bayani (Heroes’ Cemetery).

(It’s good for Marcos that his family has his remains. Many of us, we don’t have the bodies of our loved ones and we cannot even mourn their death.)

“All we have is the wall of remembrance at the Bantayog. [Our slain loved ones] don’t have graves and we don’t even know where their bodies are. Now you are telling us that Marcos will be buried at the Heroes’ Cemetery?” Quimpo, whose brother Jun was allegedly killed by the military during martial law, also said.

“Marcos’ [burial] will not bring healing. It will even cause more pain for us – for the families of those disappeared, of those killed under Marcos,” said Quimpo.

Not the way to move on

Bonifacio Ilagan of the Campaign Against the Return of the Marcoses to Malacañang (Carmma) was among the thousands who experienced the atrocities under the dictatorship.

Amnesty International has estimated there were more than 100,000 human rights victims during the Marcos regime.

“There’s no debate that we have to move on,” Ilagan said. “[But] we cannot move on if history is turned upside down.” (READ: Duterte in Ilocos Norte: I will allow Marcos’ burial in Heroes’ Cemetery)

The activist and writer emphasized that Marcos is not qualified for a hero’s burial because he had been “dishonorably discharged” as the commander-in-chief of the military when Filipinos ousted him during the 1986 People Power Revolution.

“Another disqualification, Mr President is, whoever is involved in cases of moral turpitude cannot be buried [at the Heroes’ Cemetery]. He didn’t only commit a crime to our generation but to all Filipinos he tortured and raped,” Ilagan said in Filipino, addressing Duterte. (READ: Marcos ‘qualified’ for hero’s burial based on AFP rules – DND)

For activist Boy Nuera of Pandayan para sa Sosyalistang Pilipinas (PANDAYAN), the planned hero’s burial for Marcos is an insult.

“You can bury your president in a [tomb] made of gold. You can bury the late dictator in a mausoleum made of gold. But you cannot bury the body of the dictator responsible for the deaths of thousands of Filipinos at the Libingan ng mga Bayani. You are insulting us,” Nuera said.

The Coalition Against Marcos Burial at the Libingan ng mga Bayani (CAMB-LNMB) said that a final burial in Batac, Ilocos Norte “where he is still honored is a win-win solution.”

“We believe that this can give closure to this issue, and allow the country to focus on other pressing problems that demand our attention,” the coalition said in a statement.

“More importantly, this will be in accord with the Marcoses’ agreement with former president Fidel Ramos as a condition for the return of his body to the Philippines,” it added.

CAMB-LNMB is set to hold a protest on Sunday, August 14. They will call on the President to stop the controversial burial of the late dictator. – Rappler.com