PH to US: We don’t condone unlawful killings 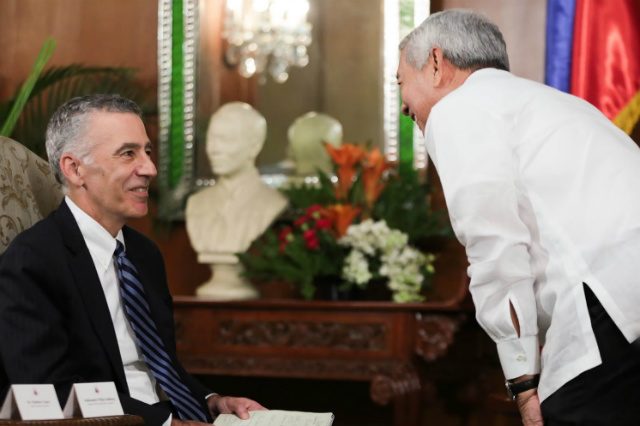 MANILA, Philippines – The Duterte administration on Saturday, August 13, issued a statement against “unlawful” killings after the United States said it is “concerned” about recent extrajudicial killings in the Philippines.

“We do not condone any unlawful killings and Philippine authorities have been instructed to immediately look into these incidents and bring the perpetrators to justice,” the Philippine Department of Foreign Affairs (DFA) said in a statement relayed by the Office of the President.

The DFA made this statement after the US embassy in Manila on Friday, August 12, released a list of concerns under Philippine President Rodrigo Duterte.

In a 4-paragraph statement, the US embassy in Manila addressed 3 issues surrounding Duterte and the US:

Data from the Philippine National Police show more than 500 drug suspects have been killed for resisting arrest as of August 9. In a separate tally, ABS-CBN News put the death toll at more than 850 to include reported summary executions.

No mention of Goldberg

In its response to the US embassy, the DFA on Saturday addressed extrajudicial killings and tackled the issue of US assistance. The department, however, dodged US criticism of Duterte’s remarks against Goldberg.

“Law enforcement officials are expected to abide by legal procedures and strict operational protocols. Alleged violations of these protocols will be investigated by the authorities and those who have broken the law will be prosecuted,” it added.

It also said the Philippines looks to “the substantial and meaningful assistance of the United States in pursuit of our own national objectives, especially in addressing the issues of counterterrorism, maritime security, and economic cooperation.”

The DFA added on Saturday, “We welcome the US Embassy’s reaffirmation of the longstanding ties between the Philippines and the United States, and the importance of the strategic alliance vis-à-vis our shared values and shared goals.” – with reports from Agence France-Presse/Rappler.com