Lopez: Clean energy is the way to go 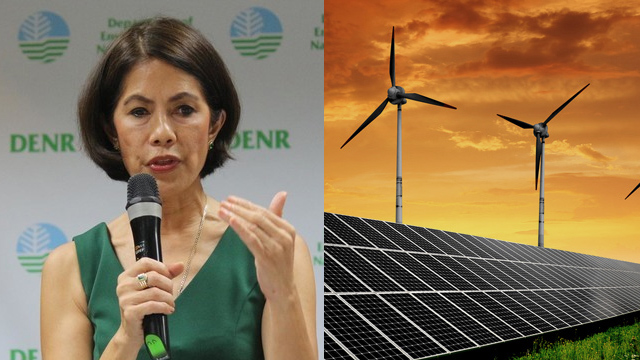 MANILA, Philippines – With her department reviewing the operations of the biggest coal mine in the Philippines, Environment Secretary Gina Lopez said it’s time for the country to “go aggressively into clean energy”.

“When I talked to [Energy] Secretary [Alfonso] Cusi, he is… going into that direction. It just needs patience, needs time. We’re going there,” Lopez said on Thursday, August 11.

The Department of Energy has teamed up with the United States Agency for International Development (USAID) to improve the country’s energy mix.

For her part, Lopez said the plan is to create models and choose certain areas “where we go just renewable.” (READ: Energy chief to Gina Lopez: Let’s find balance between coal and renewables)

“So we have chosen Palawan… I have also talked with Secretary Cusi, and he has agreed that in Palawan, we’re gonna try… I told him I’m not gonna approve any coal plant in Palawan, I won’t give any ECC,” she explained, referring to an environmental compliance certificate.

“Because the moment you give an ECC to a coal plant, it takes on the energy mix, and then you cannot give it to any other solar whatever kasi nakuha na ng coal (because it’s already been given to coal).”

Lopez said they are already studying how to run Palawan just on alternative energy. (READ: WWF: Renewable energy is the best solution to power crisis)

“If we can do it in Palawan, that means it can be done. I’ve talked to many people, and people in the renewable, they’re going to take on baseload. If government approves a coal plant, and if you look at the world scenario, renewable is going down… Renewable is gonna be very, very… much cheaper than coal,” she explained.

“If the government approves any coal plant now, you’re stuck with it for 25 years. And then if 5 years down the line we see that solar is cheaper, what will you do with that? You will have to pay the company – it’s gonna be a financial liability.”

Lopez is a staunch critic of using fossil fuels as energy sources. She has campaigned against coal mining before her appointment to the Department of Environment and Natural Resources (DENR).

But as environment secretary, she admitted it’s not as easy to close down the biggest coal mine operated by Semirara Mining and Power Corporation in Caluya, Antique, since the country is still dependent on coal.

The company supplies major coal-fired power plants and accounts for 92% of coal production in the country. (READ: Lopez warns Semirara Mining: ‘Get your act together’)

The DENR has already suspended the operations of 10 mining companies since its audit on all existing mines in the country began in July. – Rappler.com