Dela Rosa: We have ‘scientific evidence’ syndicates behind killings

Aug 16, 2016 1:07 PM PHT
Bea Cupin
Facebook Twitter Copy URL
Copied
The PNP chief says they’re ready to tell all during next week’s Senate probe because they have nothing to hide 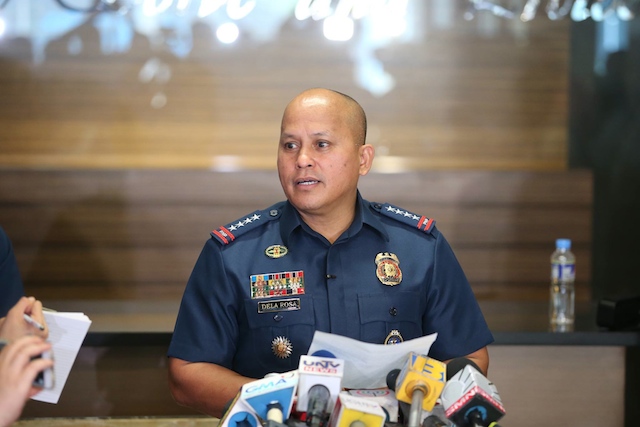 MANILA, Philippines – The chief of the Philippine National Police (PNP) on Tuesday, August 16, insisted that drug syndicates, not vigilante groups, were responsible for some cases of alleged extrajudicial killings in the past months.

It’s a claim Director General Ronald Dela Rosa has made in the past but this time, he said the PNP has the “data” and “scientific evidence” to support it.

“Meron po (We do),” Dela Rosa said when asked if the PNP was investigating alleged instances of extrajudical killings in the government’s war on illegal drugs.

“And you’ll be surprised. These aren’t by vigilante groups. Some alleged vigilante killings…it turns out these are syndicated killings by those involved in drugs,” added Dela Rosa in a media briefing prior to Tuesday’s Command Conference, his second since assuming the top post.

Dela Rosa made the statement a week before the Senate probe into allegations of extrajudical killings and summary executions committed during police operations. The PNP is among the key agencies in the so-called “war on illegal drugs.”

Since July 1, more than 600 drug suspects have died in police operations around the country. Independent tallies by media groups have pegged those killed by suspected vigilante groups at more than 200.

There has been a reported surge in instances of people apparently executed and left on random curbs and streets. Usually, beside their bodies are cardboard signs that point to their alleged involvement in the illegal drug trade. (READ: Rowena Tiamson: Graduating honor student, choir member – not a drug pusher)

Dela Rosa has repeatedly defended the PNP, saying that he “presumed regularity” in his men and women’s conduct of operations. The PNP chief had earlier said that he himself is against extrajudicial killings, even in the context of their campaign against illegal drugs.

The Senate committee on justice and human rights, chaired by Senator Leila de Lima, is set to begin its probe into the rise of drugs-related killings next week. Dela Rosa had previously lashed out against De Lima but has since toned down his sentiments towards the former justice secretary.

“Our hands are clean. They are not tainted so we have nothing to hide. We are not afraid and we will never lose our cool. Not unless we’re disrespected in the Senate. But I doubt that will happen because our senators are honorable,” said Dela Rosa, when asked about the coming Senate probe.

Dela Rosa could not immediately give figures on how many instances of alleged extrajudicial killings have been solved but told media that data would be released by the PNP. – Rappler.com