Mike Arroyo to De Lima: How does karma feel? 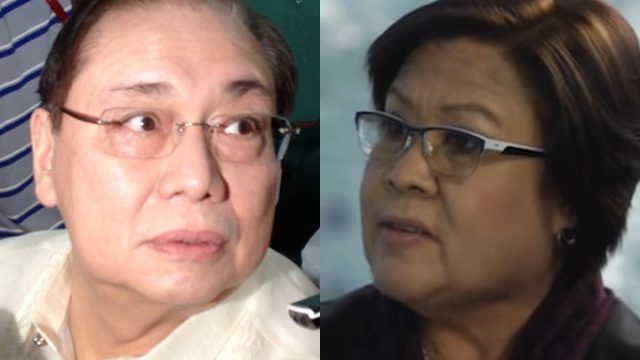 MANILA, Philippines – Former First Gentleman Jose Miguel Arroyo insinuated that Senator Leila de Lima got a taste of her own medicine after she became the target of a verbal lashing from President Rodrigo Duterte.

In a Facebook post on Wednesday, August 17, the husband of former President Gloria Macapagal Arroyo criticized De Lima for saying that the President’s scathing attacks on her – in which he branded her an immoral woman – were “very foul.“

In his post, Arroyo brought up past incidents where De Lima, who was justice secretary under the previous administration, allegedly persecuted him and his wife, former President who is now Pampanga congresswoman.

In November 2011, De Lima barred the Arroyos from leaving the country for the former president to seek medical treatment. The couple was under preliminary investigation for their alleged involvement in the reported cheating in the 2007 senatorial polls.

By doing so, De Lima defied the temporary restraining order (TRO) issued by the Supreme Court (SC), which prohibits her from implementing a travel ban against the Arroyos.

“Senator de Lima complained that what President Duterte did to her was ‘very foul.’ How about when you violated [Arroyo’s] human rights by not allowing her to leave? You willfully disobeyed the SC TRO. Wasn’t that ‘very foul’ also?” the former First Gentleman wrote.

He also recalled how De Lima accused him of trying to escape to Hong Kong, even as closed circuit television (CCTV) footage showed him going through regular departure procedures.

“How about when you said I escaped when I left for [Hong Kong]? You said flight is proof of guilt. Although the CCTV showed I went through the regular process, you never apologized. And I came back. Wasn’t that ‘very foul’ also?” Arroyo wrote.

“Now that the shoe is on the other foot, how does karma feel?” he added.

Contrary to Arroyo’s claim, however, De Lima did apologize after later finding out that a spelling error with the Bureau of Immigration records caused the misunderstanding. – Rappler.com