Aug 21, 2016 2:45 AM PHT
Michael Bueza
Facebook Twitter Copy URL
Copied
On Monday, the President plans to declare all positions filled by presidential appointees vacant due to the continued prevalence of corruption in government. The directive spares Cabinet officials. 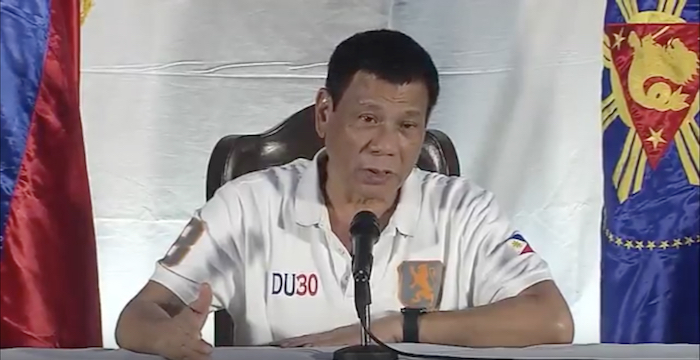 MANILA, Philippines – With the exception of his Cabinet secretaries, President Rodrigo Duterte told appointees in all government agencies to vacate their posts due to the continued existence of corruption in their offices.

In a press conference early Sunday morning, August 21, Duterte announced, “On Monday, I would declare all positions in the government….If you are there because of a presidential appointment, I will declare all your positions all throughout the country vacant.”

He later explained that the assistants and deputies can take over the posts until a replacement is appointed. Career officials would not be covered by the order.

Duterte expressed his anger over reports of continued corruption in government offices. “Until now, in my provincial visits, I still hear corruption being committed by people, especially in the regulatory agencies,” he said.

Apparently referring to the LTFRB chief, Duterte instructed him, “Come to me and see me in Malacañang.”

As for LTO executives and those appointed there, except for career officials, “Consider your positions vacant as of this hour.”

“All of them. Lahat. It will number in thousands. Consider yourself in the crucible of the truth about corruption in this country,” he continued.

“I hate it [corruption]. I do not want to give the slightest hint of it to my fellow human beings,” Duterte said.

When asked, the President said Cabinet officials are not included in his order as it is “too early for them to be corrupted.”

Duterte also explained that the fist-raising gesture he is known for was “in defiance… because I was mad at government.” As an example, he cited the series of “laglag-bala” (bullet planting) incidents at the Ninoy Aquino International Airport (NAIA).

He reiterated his promise to Filipinos to stop corruption, saying, “I will give you a clean government.”

To corrupt officials, he declared, “If you are there to commit corruption, day in and day out, please stay out.” – Rappler.com