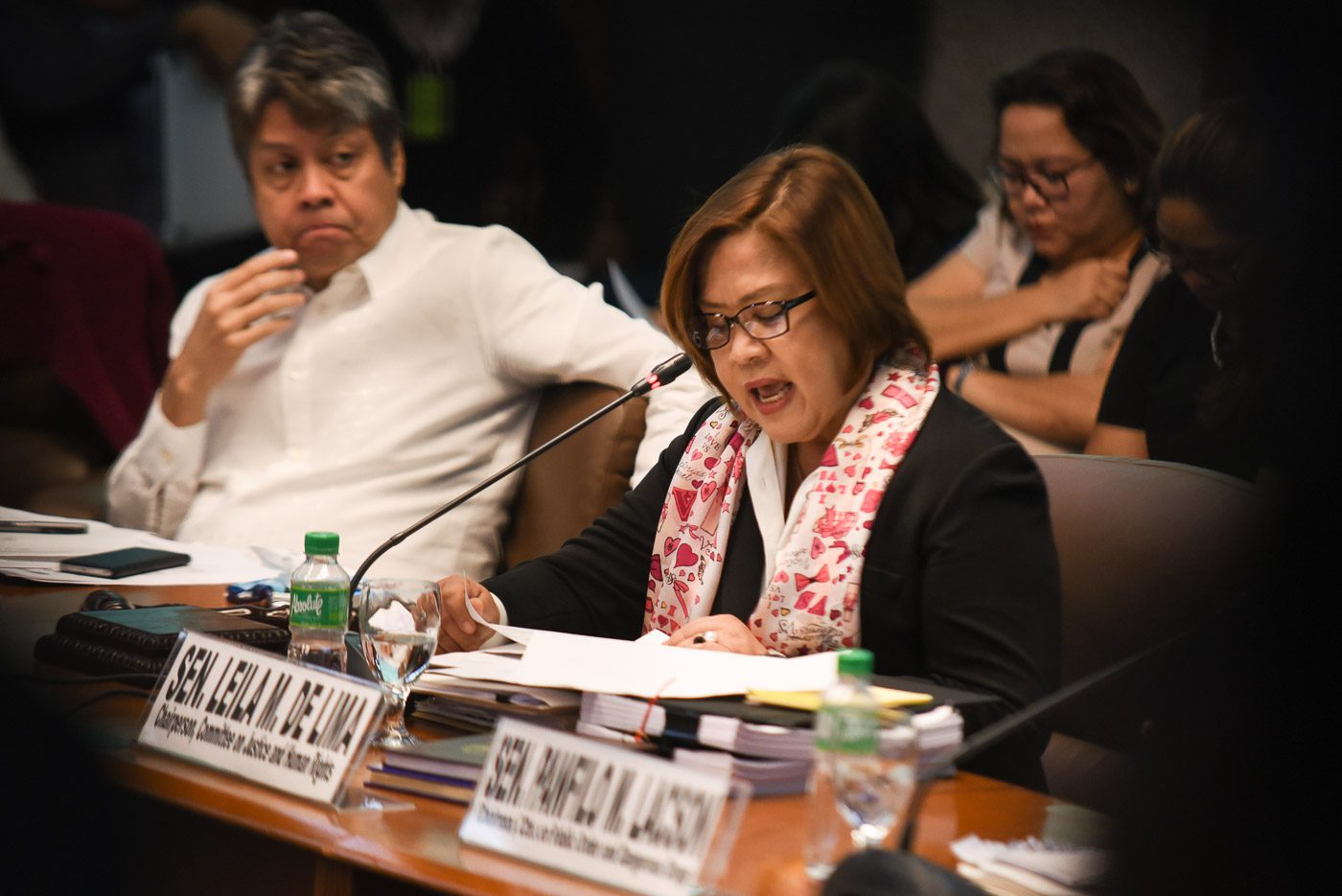 MANILA, Philippines – House leaders want Senator Leila De Lima to voluntarily attend the congressional probe into the drug use at the New Bilibid Prison (NBP) when she was still justice secretary.

According to Deputy Speaker Sharon Garin, the tradition of inter-parliamentary courtesy stops the House of Representatives from compelling De Lima to attend the investigation, but they want her to be present as a resource person.

“I would ask her as a resource speaker, not as a senator because that is beyond the role she [had in the period indicated in the resolution]. She’s a senator [now] and that’s a different position. What we are trying to find out is what happened to the Bureau of Corrections during the leadership of the then-secretary of justice. But it (attending House probe) is voluntary on her part,” said Garin on Monday, August 22.

House Speaker Pantaleon Alvarez led congressmen in filing House Resolution (HR) Number 105 that would investigate the prevalence of drug use inside the NBP when De Lima was still secretary of the Department of Justice (DOJ).

The House Speaker previously rejected the De Lima-led Senate probe into the spate of drug-related killings under the Duterte administration.

Alvarez said he would rather have De Lima investigated for rampant drug use at the NBP when she headed the justice department. President Rodrigo Duterte had made the same statement during the campaign.

On Monday, however, De Lima pushed through with leading the Senate hearing on apparent summary executions.

This is despite Duterte recently accusing De Lima of having an affair with her former bodyguard and driver Ronnie Dayan, who allegedly has links to the drug trade.

Davao City 1st District Representative Karlo Nograles, one of the co-authors of HR Number 105, said they plan to invite Dayan to the House hearing as well.

“For the sake of transparency and accountability, then we will invite all those who are suspected of being involved in such illegal drug trade; so if it involves the driver and the bodyguard, then Congress must send an invitation for him to air his side on the matter,” Nograles said.

De Lima already appealed for Dayan’s life because he is reportedly the subject of a manhunt.

She also asked Duterte to spare her family and friends from the controversy, but the President said she brought the scathing remarks on herself. (READ: Duterte to De Lima: Don’t complain, you’re a public official)

Deputy Speaker Raneo Abu clarified that De Lima and Dayan will not be the only resource persons to be invited to the House of Representatives.

“Nakalagay dito [sa resolution] ay (The resolution says that) under the leadership of then-Secretary of the Department of Justice Leila de Lima and such other heads of law enforcement agencies tasked with implementing law enforcement policies, particularly those in combating the use, proliferation, and trade of illegal and prohibited drugs. Hindi lamang si Senator De Lima ‘to (This does not only involve Senator de Lima),” said Abu.

If that pushes through, the congressional hearing would be held inside the prison, not at the Batasang Pambansa.

“Yes. Minsan kasi (Sometimes), what the resolution is trying to find out is the proliferation of the criminal acts in the [New] Bilibid Prison during the previous term. So, who do you ask as resource speaker? Who are the best people to be resource speakers? So that we can find out what went wrong,” said Garcia.

She added that this will ultimately depend on the committee that HR Number 105 would be referred to. – with a report from Chris Schnabel / Rappler.com